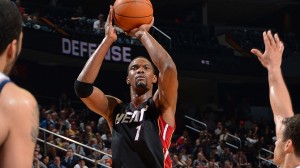 Getty Images, "Chris Bosh stepped up in the absence of Wade, leading the Heat with 21 points and seven rebounds and five assists."

With Dwyane Wade out as a precaution with soreness, the Miami Heat handled Michael Jordan’s Charlotte Bobcats in a 98-92 preseason victory at North Carolina State University’s PNC Arena.

Currently foes in the Southeastern Division of the Eastern Conference, Miami and Charlotte both entered the NBA in the 1988 season but since then have gone down two opposing paths of excellence.

No Wade, no problem, as the Heat fed Chris Bosh early in the post, clearing out and allowing the skillful big man to go to work.  In the first half, Bosh had 13 points, four assists and dominated second year defensive specialist Bismack Biyombo out of the Congo, who has a 7-foot-7 wingspan but was unable to keep his feet in front of the nibble Bosh.  The efficient Miami Heat offense finished the first quarter red hot, shooting 67-percent from the field and led 31-22.  Ray Allen, the greatest three point shooter of all-time, uncharacteristically air-balled a shot from beyond the arc in the second quarter, but got a three the hard way on a pump fake that forced Biyombo to commit a shooting foul as he knocked down the baseline jumper.  Allen had a solid night, finishing with 15 points, four rebounds and three assists.

Point guard Ramon Sessions, who was traded last year from the Cleveland Cavaliers to the Los Angeles Lakers mid-season, led Charlotte in the second quarter against the Heat’s second unit.  Sessions finished with 24 points as the Heat saw their first quarter lead diminished to 49-44.

During halftime, Duke University basketball head coach and coach of the 2008 and 2012 USA Olympic basketball team, Mike Krzyzewski was doing an interview for Fox Sports; Lebron came by and gave him a huge hug from behind.

“Lebron is in mastery right now,”  Krzyzewski said.  “He is a brilliant player, a great leader and the only guy in the history of our game who could play every position on both sides of the ball.”

Coach Krzyzewski also alluded to the possibility of Lebron dishing out 20 assists in a game this season with all of the great shooters he has as teammates.

“That’s a lot of pressure but I’ll get them the ball,” James said.  “If anything that puts more pressure on our shooters.”

However, the Heat’s trio of Bosh, Allen and James were too much in the third quarter for the Bobcats’ younger, less experienced players.  Miami outscored Charlotte 32-21 in the third, leading 81-65 going into the final quarter.  After the Bobcats went on a 19-5 run in the fourth to tighten the lead to 92-90, Miami came back strong led by Terrel Harris’ 10 points and four rebounds as the Heat, who never trailed in the game, escaped defeat.

“It’s the repetition that we go through in practice as we try to get better,” James said.

Chris Bosh stepped up in the absence of Wade, leading the Heat with 21 points and seven rebounds and five assists.  In addition, Lebron struggled shooting only 2-of-8 for 10 points but dished out eight assists mostly to open shooters.  Udonis Haslem is expected to make his preseason debut on Wednesday against the Washington Wizards and Dwyane Wade is also expected to play.

With this win the Heat improved to 4-2 in the preseason with just two preseason games left this week before the much anticipated season opener on October 30, in a rematch of the Eastern Conference Finals against the rival Boston Celtics.