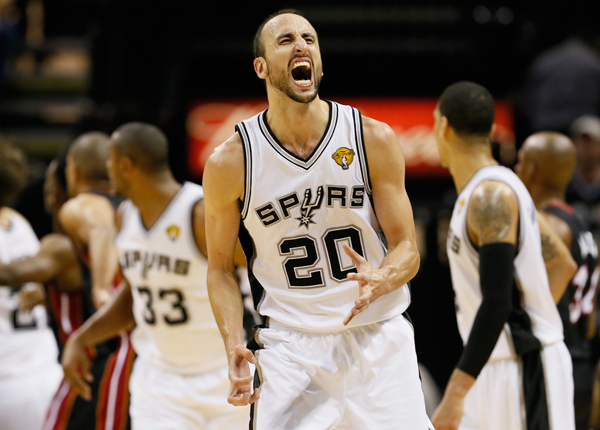 For the second straight game, a struggling future Hall of Fame guard rose to the occasion with his team in need of a win.

In Game 4, it was Dwyane Wade. In Sunday’s Game 5, it was Manu Ginobili, as the San Antonio sixth man rewarded coach Greg Popovich for putting him into the starting lineup after a horrendous performance Thursday by scoring 24 points and dishing 10 assists to lead the Spurs to a 114-104 win to take a 3-2 series lead over the Miami Heat. 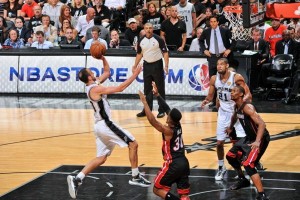 Ginobili scored just 17 total points in the previous three games in the series, but he surpassed that in the first three quarters Sunday with 20 points, including seven during a 12-1 Spurs run to close the third period and take an 87-75 lead into the fourth.

It was a massive turnaround for a player who looked all but done as a significant factor through the series’ first four games.

“We had a couple of good talks in the locker room. We all knew how important this game was and that we needed a win,” Ginobili said after the game. “We couldn’t go to Miami needing to win both games. It’s a great opportunity now that we’re one win away.”

Popovich said he wasn’t surprised that Ginobili responded with such a big performance after a wave of criticism following Game 4.

“Manu is a competitor. He just keeps pushing and he does what he does,” the coach said. “He’s come to practice and worked on his shot. He’s seen film. He has confidence in himself that he should just continue to compete. It’s what he’s done all year and tonight he played his best game in a while. Obviously, it was very helpful.”

It was far from a one-man effort for San Antonio, however, as Tony Parker showed no ill effects of a strained hamstring to score 26 points on 10-of-14 shooting, with Tim Duncan adding 17 points and 12 rebounds, and Danny Green continued his history three-point shooting spree, making 6-of-10 from long distance to break Ray Allen’s record for most threes in an NBA Finals series.

Green’s fifth three-pointer of the night sparked a 21-2 Spurs run after Miami had trimmed a nine-point halftime deficit to one at 75-74 with 3:04 left in the third quarter.

Ginobili followed with a three-point play on a baseline drive, and then connected on a step-back jumper to make it 83-74.

Tiago Splitter finished a layup underneath off of a feed from Ginobili, who ended the half with a driving bank shot to put the Spurs up 12.

The lead ballooned to 20 early in the fourth before the Heat rallied the cut the margin back to 98-85 after seven points from Ray Allen and a dunk by Chris Bosh with 7:24 remaining.

Another three and layup by Allen got Miami to within single digits at 109-100 with 2:02 to play, but a driving layup by Parker and another three from Green in the right corner made it 114-101 and put the game out of reach.

The San Antonio starters scored 107 of the 114 points, with the Spurs’ bench being outscored by Miami’s reserve unit 31-7.

It hardly mattered, as the Spurs’ starting unit shot a scorching 39-of-61 from the field, with the team finishing at 60 percent for the game.

That total was nearly matched by 66 points from LeBron James, Wade, and Bosh, but the Heat converted just 43 percent from the floor as a team and weren’t nearly as sharp on the defensive end of the floor as they were on Thursday.

“They just absolutely outplayed us,” Heat coach Erik Spoelstra said. “Everybody on their team was just taking turns going by us off the dribble.”

Allen delivered his best game of the series with 21 points on 7-of-10 shooting, making four of the team’s 11 triples on the night.

But the veteran shooting guard said that the overall effort that the team displayed in Game 4 just wasn’t there Sunday.

Wade had his second straight good game with 25 points and 10 assists, while James finished with 25 points, eight assists, and six rebounds, but each had trouble finishing at the basket at times, with both uncharacteristically missing multiple layups.

“That’s where it starts for us, getting into the paint,” James said. “Between the two of us, we probably missed 12 layups tonight. I missed a lob, missed two layups in transition on the same possession; I know D-Wade had a couple of layups he didn’t finish. Those are shots that we normally don’t miss.”

Down 3-2 going back home for two games, Miami’s margin for error is officially nonexistent, with Tuesday’s Game 6 a must-win if the Heat are going to repeat as champions.

“There’s no other way to look at it,” Allen said. “We’re in a situation where it’s a must-win. Everything we’ve done all year has come to this point right here. We have to win. It’s a situation where over the course of the year we’ve found ourselves in so many different situations. We’ve thrived in tough moments. This team is a tough team. We’re ready for Game 6.”

The Heat have failed to win consecutive games in the playoffs since the Eastern Conference semifinals, but they’re going to have to in order to win this series.

“We’ve got an opportunity to win something special,” James said. “We’re looking forward to it.”