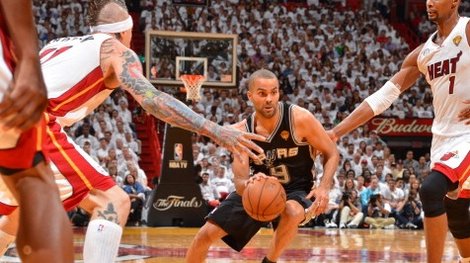 The Miami Heat have not been strangers to ‘must-win’ situations in the playoffs during the Big Three era that started in 2010, and the defending champions find themselves facing another such scenario Sunday night at home.

After falling to the San Antonio Spurs 92-88 in Thursday’s Game 1, the Heat almost certainly must salvage at least a split of the first two games in Miami before heading to Texas for three consecutive road games if they are to realistically challenge for a second consecutive title.
Though a loss Sunday wouldn’t eliminate the Heat or necessarily create an inevitable result – especially given Miami’s impressive 5-2 road record in the 2013 playoffs – it would require the team to make history as the first to ever win a Finals series after dropping the first two games at home. 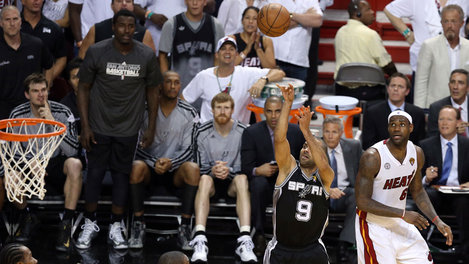 Getty Images, “Shutting down Tony Parker will be a major part of Spoelstra’s game plan for Game 2.”

“It’s very urgent,” Heat guard Dwyane Wade said Saturday of the team’s need to win Sunday night. “Obviously, you don’t want to go down 0-2 going to San Antonio for three straight games.  The odds are not that good and not in our favor.  We’re not a team who says too much that it’s a must-win game, but this is a must-win game for us.”

To turn the tables on the Spurs in Game 2, the Heat will need far better offensive execution than they displayed in the second half and especially in the fourth quarter Thursday.

After scoring 52 points in the first half Thursday, Miami managed just 36 in the second, with the fourth period a particularly gruesome exhibition of offensive inefficiency.

The Heat converted just 5-of-18 shots from the field and 0-of-5 from the three-point line while turning the ball over five times after only three giveaways in the game’s first 36 minutes.

Wade and Chris Bosh struggled mightily in the final 12 minutes of action, with Wade going scoreless on two shot attempts with no assists or rebounds, and Bosh making 1-of-5 for two points with a single rebound.

Both will need to make bigger contributions Sunday if the Heat are to avoid a 0-2 deficit.

“Obviously, we know we can play better in the fourth,” Wade said.  “The good thing about having two days in between is you can kind of get to your package and work on the things you need to do when you get in that position.  I feel like we’ll be more prepared when we get into the fourth quarter [Sunday].

“It’s a fine line between taking shots and taking good shots.  We have to find a way to continue to get great shots in the fourth quarter and not settle as much for the first look that might not be the best opportunity, especially now because it means so much.”

LeBron James scored six points in the final period and finished the game with his second consecutive NBA Finals triple double with 18 points, 18 rebounds, and 10 assists.

However, Heat superstar drew some criticism after the game for perhaps not being aggressive enough in finding his own shot after just 16 attempts for the game and four in the fourth.

While James acknowledged instances where he could’ve been more aggressive, he said that he will continue to trust his teammates to make shots if the Spurs continue to pack their defense into the paint and collapse on his penetration.  “When I decide to pass, I feel like it’s a teammate open that can make a play, and for me offensively, I attract so much attention that if a guy is open on my team, I will pass the ball,” he said Saturday.  “The Spurs did a good job of shrinking the floor.  If that’s their game plan, we’re going to continue to exploit that and I believe our guys will be there to knock those shots down.”

The strategy of trying to keep Miami, and James in particular, out of the lane isn’t new to the Heat, with coach Erik Spoelstra saying Saturday that the answer to avoiding stagnant stretches like in Game 1 is a combination of a more active defense and a more attacking approach on offense.  “We need to be committed to playing our style and our pace. Eighty-eight points and 16 in the fourth is not good enough,” he said.  “There are a lot of factors that go into that like only forcing four turnovers and not having any in transition even off of rebounds in the second half.

“We were not being aggressive enough when opportunities presented themselves in the half court to put the ball on the floor even though it’s a packed defense and working the offense side to side to loosen it up.  It’s a lot of different things.  We know we have to get to our game and that opens it up for everybody.”

Spoelstra expressed confidence that his team would respond with a better performance in Game 2 just as it has done in the past, with the Heat posting a 17-1 record over the past three postseasons after falling behind in a playoff series.

The Heat are 4-0 in this postseason following a loss with an average margin of victory of 22.3 points per game.

“We understand the urgency.  Our guys, this isn’t the first time they’ve been through it,” the coach said.  “There’s a maturity with this group. But it’s not a guarantee.  We don’t take that for granted.  Guys get angry; they own it.  We all own it together and we just work together to try to get better.  We know we’re playing against a very good basketball team and we have to bounce back and play a better game.”

The Heat will also need a more aggressive James, which based on the four-time MVP’s playoff history, they seem likely to get.

In 15 playoff games over the past three seasons following losses, James is averaging 28.6 points, 9.7 rebounds, and 5.2 assists per game.

James is also averaging 2.1 more shot attempts, one fewer assist per game, and 1.2 more rebounds than in his 46 other postseason games with Miami, meaning that the Heat will likely get a more energetic and aggressive James on Sunday, as they traditionally have when more desperate for a win.

In games in which the Heat have been trailing in the series for the past three seasons, James has been superb, posting averages of 29.2 points, 9.2 rebounds, and six assists while shooting 59.4 percent from the field and helping the Heat win by an average of 17.5 points per game.

On Friday, James said that he doesn’t go into any game with a plan to shoot more than usual, but he’s prepared, as usual, to shoulder a heavy load for his team.

“I don’t really predetermine what I’m going to do. I kind of let the game flow for itself,” he said.  “I put myself in position to do everything for this team, a little bit of everything, and put us in position to win.  It’s very challenging mentally and physically, but you have to figure out a way to have will at this point in the season.  There aren’t many days left, so there’s no room for excuses.”