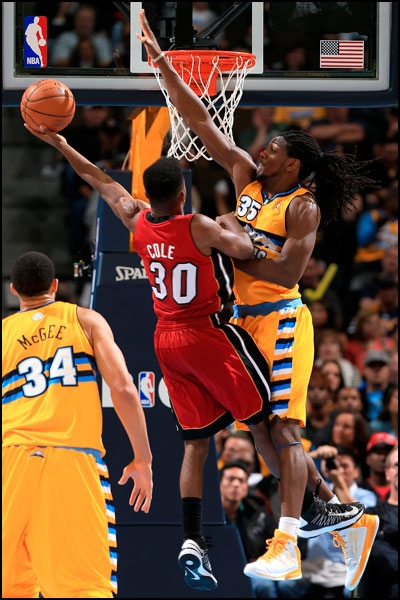 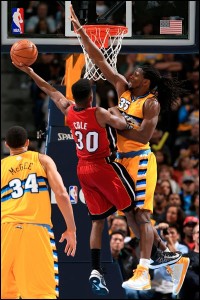 Photo credit: Doug Pensinger, "Cole, who shot a dismal 3-12, pulled up with the utmost confidence behind the three point lane and clinched the game, giving Miami the lead for good."

Head coach Erik Spoelstra pleaded to his team, “Guard the ball.  You really gotta contain the ball, one on one, take the challenge.”  After a lackluster effort in the City of Angels Wednesday night, the Miami Heat took a different approach on Thursday night, to defend the ball and trust their teammates.  And that they did.  Coming off an embarrassing 107-100 loss on the road to the clippers.  Miami was lacking cohesion, both on the defensive end and the offensive end. Tonight would be different.

Miami held the Nuggets to 30% shooting from beyond the arc, compared to the 48% shooting they allowed from the night before, and evidently had listened to Spoelstra’s message.  The defensive rotations were quicker, teammates were communicating, and the Heat were playing to their identity.  Both Shane Battier and Udonis Haslem combined for four charges and the Heat only allowed the Nuggets to get the line 19 times, compared to 32 times from the night before. After the game James commented, “Our staple is defense, every single night.  In order for us to win throughout the season we have to defend like we know we’re capable of doing.”

In addition to the phenomenal defensive efforts that Miami brought Wednesday night, their offense was to be reckoned with.  Shane Battier and Mike Miller combined for a total of 10 three’s and were really the spark that the Heat needed on the offensive end in the first and third quarter.  Battier finished with 18 points on an impressive 6-7 shooting, while Miller contributed with 12 points and five rebounds.

Throughout the game, James was as cool, calm, and collected as could be and finished the game with a team-high 27 points, 12 assists, and seven rebounds.  He played a near flawless game, distributing the basketball when he was double teamed and taking advantage of his opponent when he was left in an isolation situation.

Unfortunately, after the second quarter, the defensive-minded Mario Chalmers had to leave the game because of a right tricep strain and leave the point guard duties to young Norris Cole. Norris was bullied every which way by Andre Miller, who alongside Javale McGee, sparked an almost miraculous comeback in the fourth quarter.  Miller finished the game with 19 points, seven assists and five rebounds, while McGee scored 18 points on a super efficient 9-12 shooting.

Denver fans rose to their feet in anticipation of another victory, celebrating a decade long win streak against the visiting Miami Heat.  Little did they know, Cole would arrive to the party just in time.  After James put Miami up 92-87 with a fadeaway jump shot, Denver made four free throws in a row, cutting the Miami lead to just one.  That’s when LeBron drove into the lane, drew three defenders, and found a wide open Norris Cole on the left baseline.  Cole, who shot a dismal 3-12, pulled up with the utmost confidence behind the three point lane and clinched the game, giving Miami the lead for good.  When James was asked about that last pass to Cole, there was only one word he could think of, “trust.”