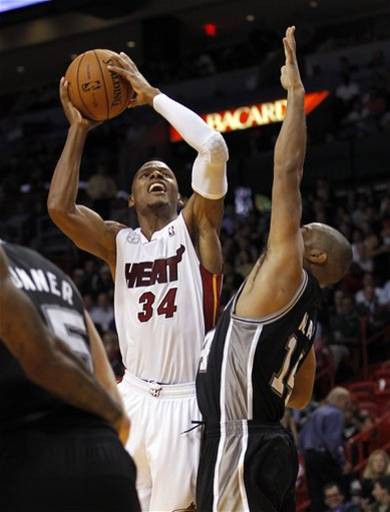 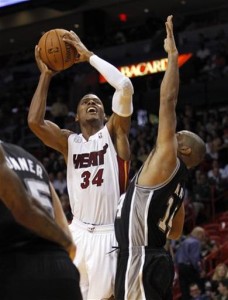 Photo Credit: Alan Diaz, “Allen had 20 points in 27 minutes off of the bench, none bigger than his final three."

For the second straight game, LeBron James found Ray Allen for an open three to put the Miami Heat ahead with 22.6 seconds remaining, proving why Miami marveled at the opportunity to add the greatest three point shooter of all time this offseason.

Both teams have their own  “Big Three” but the South Beach version was the only one in Miami as the Heat improved to 7-0 at home with a 105-100 hard fought victory over the San Antonio Spurs.

Patrick Mills, Nando De Colo, Tiago Splitter, Matt Bonner, and Boris Diaw are not the collection of players fans are accustomed to seeing start for San Antonio, especially in a TNT primetime showcase against the Miami Heat.

Mills, De Colo, Splitter,  and Diaw all played in the 2012 Summer Olympics in London for their respective countries and were not intimidated by the big stage and bright lights.

In their fourth game in five days, San Antonio Coach Gregg Popovich decided to rest Tim Duncan, Manu Ginobli, Tony Parker as well as starting guard Danny Green, none of which traveled with the team to Miami.

The loss snapped the Spurs eight straight road wins and also were without role players Kawhi Leonard and Stephen Jackson, dressing only nine players for the final game of their ten day road trip.

Commissioner David Stern also issued a statement sincerely apologizing to fans, and also mentioned that substantial sanctions will be coming the Spurs way.

Despite the controversy and the leagues unrest with the situation, there was still a game that had an unexpected 23 lead changes and special guest Charles Barkley assisting in the play-by-play announcing to add to the entertainment.

“This is the NBA, it doesn’t matter who is in the jerseys,” Dwyane Wade said.  “For me, everyone is playing, I mean it’s the Spurs, they are a good team.”

As expected Miami got out to a quick start with an 11-0 run to claim a 16-6 lead but unexpectedly, San Antonio, led by Bonner’s six points and six rebounds in the opening quarter, finished on a 21-6 run and held a 27-22 lead after the first 12 minutes.

For his entire career, so-called analyst, biased haters, and reporters have clamored about James’ inability to be clutch down the stretch to end the game.

After trailing 87-83, James continued to distinguish the flames his naysayers have set by taking over with an impressive collection of seven points, two rebounds, two assists and two steals in the final five minutes; not to mention the no-look pass to Ray Allen to give Miami a 100-98 lead.

James had eight points in the first six minutes but was held scoreless for 15 minutes until a layup with three minutes left in the first half.

James has scored 20 or more points in all 14 games this season, finishing with 23 points, nine rebounds, seven assists and four steals.

“No disrespect to Kobe, but (LeBron) is the closest thing to Michael Jordan,” Barkley said.  “By the end of his career it is going to be scary.”

With Wade continuing to struggle, Chris Bosh has stepped up in his new found center position and has become the second most reliable scorer for Miami.  After leading Miami with 12 first half points, Bosh had himself another double-double with 18 points and 12 rebounds but once again was overlooked during crunch time to make way for James and Allen.

The Spurs’ team play, unselfish passing, great floor spacing and ability to knock down shots from deep proved that the entire roster can compete in any game against any team.

A favorite of ESPN’s First Take Skip Bayless, Tiago Splitter, the 2010 Spanish League Player of the Year, had 18 points and nine rebounds for the Spurs, and showed his versatility to both shoot and score down low.

Point guard Gary Neal also capitalized on the opportunity to be a feature player, leading San Antonio with 20 points and seven assists but also committed a team-high seven turnovers.

With Shane Battier out with a sprained MCL, Rashard Lewis got his first start as a member of the Heat, and Ray Allen and Mike Miller also saw premium minutes.

Allen had 20 points in 27 minutes off of the bench, none bigger than his final three, but summed up the kind of night it was for Miami when he fouled James Anderson form half court with .6 seconds left in the third quarter that led to three free throws and a 76-73 Spurs lead.

Moreover, Miami’s inability to defend the three point shot continues to be exposed.  The lack of intensity necessary to compete with the top ranked teams is not there yet.

Against the defending NBA Champions, San Antonio made 10 three pointers and if there was an award for hustle and intensity, the Spurs reserves would have earned some hardware of their own.

“I’m not surprised, what we are doing is not good enough.  That is clear as day,” Heat Coach Erik Spoelstra said after trailing 76-73 going into the fourth quarter.  “We can rationalize any excuse you want, but we are better than that.”

After finishing the first full month of the season with an 11-3 record, Miami has Friday off, and will have to work on their shortcomings before a showdown Saturday with the second place team in the Eastern Conference, the Brooklyn Nets.