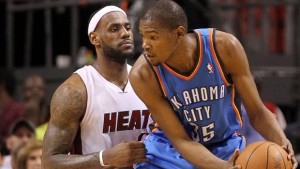 Getty Images, "While the matchup features a battle of arguably the NBA’s two best teams and two best players, James said that it’s still just a regular season game, and will not make or break either team’s year."

Six months after playing for the NBA title, the Miami Heat and Oklahoma City Thunder will lock horns once  again on Christmas Day in a meeting between two teams who still rank as perhaps the best in their respective conferences.

Miami (18-6) currently sits atop the Eastern Conference standings a half game ahead of the New York Knicks after winning four straight and six of the last seven, while OKC (21-5) also has the top spot in the West by a half game over the Los Angeles Clippers.

If not for the Clippers’ 13-game win streak, the Thunder would likely be considered the league’s hottest team, having won 12 of its last 13 games by an average margin of 13.7 points per game.

The Thunder were knocked off 99-93 by the Minnesota Timberwolves in their last game, but OKC has once again emerged as arguably the favorite to come out of the West and make a return trip to the Finals.

Certainly, they have the Heat’s undivided attention.

“We understand who’s coming to town,” Miami coach Erik Spoelstra said Monday.  “I think we’ve been tightening up our game a little bit, but these guys (the Thunder) have been playing at an elite level, so we’re looking forward to the matchup.  We know who we’re playing and how they’ve been playing.”

After a 1-2 start to the season, the Thunder have been virtually untouchable, winning 20 of 23 games and moving up to No. 2 in the league in point differential (plus-8.9).

The initial turbulence of the season’s first week could be understood given the major roster shakeup that stunned the NBA world, as last year’s Sixth Man of the Year James Harden was dealt to the Houston Rockets just before the season started, with veteran shooting guard Kevin Martin and rookie guard from Connecticut Jeremy Lamb coming back as the principles in the deal.

Many assumed that the Thunder would take a step back after losing the explosive 23-year-old guard, but while Harden has flourished as the No. 1 guy in Houston, OKC has continued to roll right along as the same juggernaut it was before.

Last year’s Most Valuable Player runner-up Kevin Durant is having another MVP-caliber season, averaging 27.9 points and 8.4 rebounds while threatening to eclipse the hallowed shooting trifecta of 50 percent from the field, 40 percent from three, and 90 percent from the foul line, and also upping his playmaking with a career-best 4.2 assists per game.

Point guard Russell Westbrook, whose game was perhaps most affected by Harden’s presence on the floor last season, has seen his shooting numbers fall to 40.7 percent from the field, but he is also having a career best season as a playmaker, averaging a career-high 8.8 assists, and is also on the verge of setting career bests in 3-point percentage (35.2) and steals (2.1 per game).

Spoelstra said that subtracting Harden was significant loss for the Thunder, but it also meant more touches for Durant and Westbrook, which isn’t necessarily a positive for OKC’s opposition.

“If you take a guy like Harden, who was a big playmaker for them in the past and often had the ball in his hands, if you take a high possession player like that off your team and add Kevin Martin, who plays primarily off the ball, the ball has to go somewhere,” he said. “So you see the usage rate go up for their two most talented players and that is a challenge.”

The result is a team that, at least through 26 games, has been better than the group that won 71.2 percent of its games in last year’s regular season.

Spoelstra said that the Thunder have the look of a team that has used the disappointing Finals loss to the Heat as fuel to the fire to start this season, though some of the team’s evolution can be simply attributed to its youth, with Durant, Westbrook, and Serge Ibaka all still under the age of 25 and still developing as players.

“They’re highly motivated and highly talented,” the coach said. “They get better with more time. That’s what good teams do. They’re an elite basketball team that continues to get better each year. I think people forget how young they are. Each year, they’ve gone further in the playoffs.

“Those guys have certainly made big strides each year and it didn’t stop with the success they had last year. I think that fueled them even more.”

The matchup in last year’s Finals was hailed by many as a potential portent into a future that would feature multiple championship meetings between the two teams and a budding individual rivalry between friends and Olympic teammates James and Durant.

James, who worked out with Durant this summer for the second straight off-season, said he continues to see growth in his younger counterpart.

While Durant has been unsurprisingly spectacular so far, James has been the model of consistency and discipline, with the three-time league MVP in the midst of a pair of impressive streaks, one perhaps more unusual than the other.

James has scored 20 or more points in the first 24 games to start this season, which ties him with Utah Jazz legend Karl Malone for the most ever to start a season.

Going back to last year’s playoffs, James has scored 20 or more points in 45 straight games.

Odder and perhaps even more impressive than that mark is James’ current six-game foul-less streak, with the Heat superstar not being whistled for a personal foul since being called for two in a Dec. 8 home game against the New Orleans Hornets.

James has played over 220 minutes in those games and scored 157 points over that span.

“When I hear the stats, they are pretty cool,” the eight-time All-Star said. “But it doesn’t mean that much to me. Winning is the ultimate for me. I strive to be great. That’s my motivation each and every night I step on the floor. I want to be the best player I can be every night. I don’t take that for granted.”

While the matchup features a battle of arguably the NBA’s two best teams and two best players, James said that it’s still just a regular season game, and will not make or break either team’s year.