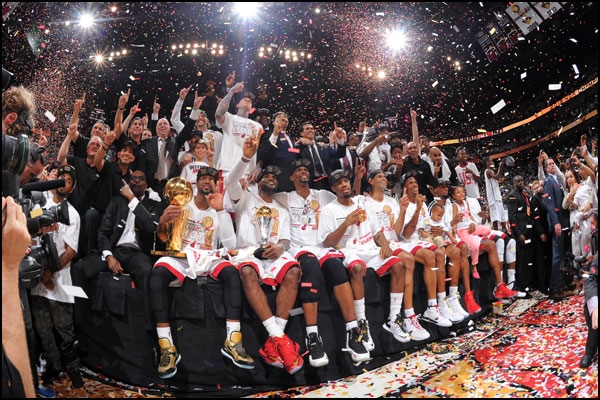 NBA Finals Game 7 Recap (Miami, FL) — They say Game 7’s are where legends of the game are made.  After Thursday night’s Game 7 performance, the legend of LeBron James will continue to grow.

The NBA’s four-time league Most Valuable Player earned his second straight Finals MVP with a dominant 37-point, 12-rebound performance in leading the Miami Heat to a 95-88 victory over the San Antonio Spurs and the franchise’s second consecutive NBA title. 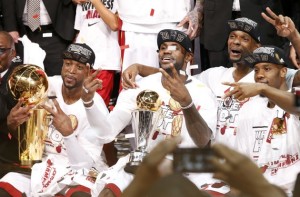 It’s a performance that hit back at many of the biggest criticisms James has faced through his career: not being a clutch player, not being able to knock down shots from the perimeter in big moments.

After Thursday night, those criticisms can be officially retired.

“Listen, for me, I can’t worry about what everybody says about me,” James said after the game.  “I’m LeBron James from Akron, Ohio, from the inner city.  I’m not even supposed to be here.”

James came through with perhaps the biggest performance of his career, making a playoff-high five three-pointers and peppered the sinking Spurs defense with jumpers all night, the biggest of which coming with 27 seconds left to put Miami up 92-88 with the Heat clinging to a two-point lead.

“I work on my game a lot.  Throughout the off-season, I put a lot of work into it,” James said of his improved shooting.  “To be able to come out here and see the results happen, it’s the ultimate.  I’m at a loss for words.”

James came up with a steal off of an errant Manu Ginobili pass on the ensuing possession, and then made two free throws with 23 seconds to play to put the Heat up six to all be seal the victory.

The win gave the Heat’s Big 3 a second straight title, and gave the Heat organization its third overall, with coach Erik Spoelstra saying that this victory was the hardest earned of all.

“This is the toughest series we’ve ever been in,” he said.  “Our absolute respect and hats go off to the San Antonio Spurs.  It’s a class organization, a championship organization. We have as much respect for them as anybody in the league.”

Said James: “The second one was way harder than the first one. After I won my first one, people started telling me it would get easier and easier.  That’s not true.  This was the hardest by far.”

Miami got to Game 7 with a miraculous late-game comeback and finish in Game 6, and had to work every bit as hard to win Thursday.

The Heat never led by more than six points in the first half and needed a buzzer-beating bank shot three-pointer to take a 72-71 lead into the fourth period.

Consecutive mid-range jumpers by James gave the Heat an 85-79 lead with 4:32 to play, but just as Miami appeared destined to pull away, the Spurs responded by trimming the margin back to two on a three-pointer by Kawhi Leonard to make it 90-88 with two minutes left.

Two possessions later, the Spurs had a golden opportunity to tie the game with just under 50 seconds to play, but Tim Duncan missed two consecutive shots at point blank range, with James’ jumper on the next possession putting Miami up four.

It was a huge missed opportunity for the future Hall of Famer, who finished with 24 points and 12 rebounds, but was dejected in the post-game press conference.

“The obvious word is disappointing,” Duncan said. “I made some bad decisions, missed some tough shots.  I don’t know what to say.  Credit to the Miami Heat.  LeBron was unbelievable, Dwyane was great.  I just think they found a way to get it done.  We gave ourselves opportunities to win the game, but we couldn’t turn the corner.  They made more plays down the stretch.”

James and Wade combined for 50 points on 23-of-44 shooting, including 29 of the team’s 46 first half points, as well as 36 of 41 Miami points over a stretch of the second and third periods.

“They played Hall of Fame basketball tonight,” Popovich said of the Heat duo.

Like James, Wade made the Spurs pay for their defensive strategy of playing off and enticing the duo to take jump shots, making several mid-range shots en route to a 14-point first half, with James taking over in the third period by knocking in 3-of-4 threes for 13 points.

“It’s better to be timely than good,” Battier said after the game.

James said he wasn’t surprised to see the veteran forward come through for the team in such a big moment.

“He’s a true professional . He never got down on himself,” he said.  “Every time Shane is open, we tell him to shoot the ball.  For him to come through with six threes was big-time.”

Wade was also able to bounce back, shrugging off a pedestrian Game 6 performance to make 11-of-21 shots, grab 10 rebounds, and play perhaps his sharpest defensive game of the series to help lead the Heat to another title, the third of his career.

“This is sweet.  This is the sweetest one by far because of everything we’ve been through and everything I’ve been through individually,” Wade said, noting his prior struggles through the playoffs due in part to a deep bone bruise that limited his explosiveness.  “To get here to this point and have this kind of performance to be able to help my team is so special.”

But while Wade’s contribution was key, the game and the series ultimately belonged to James, whose performance at both ends of the court while playing a combined 95 minutes in the final two games left Spoelstra flummoxed for where he found the energy.

“I’m not sure.  He’s the best conditioned athlete in this game, and he takes pride and puts in so much time into it,” he said.  “He was guarding Parker, Ginobili, whoever was the most dangerous threat, and he had to create so much offense for us.  He probably lost 12-15 pounds in the playoff run expending so much energy.  He always rises to the occasion when it matters most and when the competition is fiercest.”