The finely tuned machine of the Miami Heat is firing on all cylinders, winning nine of their last 11 games en route to closing out 2012.

However the Heat will look to rebound after falling to the Detroit Pistons as they travel to play the Milwaukee Bucks on Saturday December 29.

Miami (20-7) is off to a franchise best start but coming off of a disappointing 109-99 loss to the Pistons on Friday night snapping a six game winning streak. 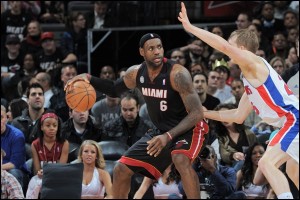 Photo credit: Allen Einstein, "James is averaging 25.6 points 8.7 rebounds and 6.9 assists per game and is shooting an efficient 54.2 percent from the field this season."

“It shows you it does not take much in this league for the tables to turn and momentum to change,” Heat Coach Erik Spoelstra said.

Putting up numbers that have not been seen since the days of Oscar Robertson and his historic season of averaging a triple-double in 1962, LeBron James is in cruise control on his way to possibly a fourth regular season MVP award in five years.

James is averaging 25.6 points 8.7 rebounds and 6.9 assists per game and is shooting an efficient 54.2 percent from the field this season.

Milwaukee currently has veteran swingman Mike Dunleavy slotted as their starting small forward, and with his lack of any athleticism, expect James to have another big game like the 35 points he had Friday.

The Bucks’ young backcourt duo of Monta Ellis and Brandon Jennings is arguably the best in the league and are in their first full season as teammates.

Jennings is a young, flashy point guard who can score from anywhere on the court.  He has a knack for penetrating through defenses off of the dribble before finishing at the basket and consistently knocks down shots from deep.

The lefty is averaging 17.6 points and 5.9 assists per game and is coming off of a 25 point night on Wednesday in a 108-93 victory against the Brooklyn Nets who then consequently fired Coach Avery Johnson after 28 games.

Jennings’ speed and ball-handling skills, reminiscent of “And 1” street ball will be a mismatch against Mario Chalmers, who has stepped up on the offensively end knocking down open shots but struggles to contain talented guards.

But the play of backup point guard Norris Cole, who has been a pleasant surprise over the past few weeks, will be vital for the Miami defense to contain Jennings.

Ellis was acquired from the Golden State Warriors in a mid-season trade last season for center and former number one overall pick Andrew Bogut, among others.

The shooting guard leads all Bucks players averaging 19.5 points per game and can drop 30 points any given night like the 37 he scored in a losing effort to the Cleveland Cavaliers on Saturday.

He is a versatile guard who is extremely athletic with the ability to shoot from 25 feet away and slash to the rim much like Heat guard Dwyane Wade.

The matchup between Wade and Ellis will be one of the premier backcourt showdowns in the NBA and is sure to be a display of athleticism.

After serving a one game suspension for kicking Ramon Sessions in the groin Wednesday night against the Charlotte Bobcats, Wade will be back in action for Miami.

Wade has returned to his former “flash” self over the past week and is averaging 20.2 points per game in his 9th year out of Marquette University and was greatly missed against Detroit.

While at Marquette, a Catholic Jesuit University in Milwaukee, Wade reached the Final Four under Coach Tom Crean, who is now the head coach for the top ranked Indiana Hoosiers.  It will be a reunion of sorts for the all-star guard, and expect a mixed reaction of cheers for him and boo’s for his teammates from the crowd during pre-game introductions.

The combination of James and Wade both scoring over 20 points per game is improbable for many teams to overcome, not to mention the rest of the supporting cast.

Center Chris Bosh is quietly averaging 17.7 points and 7.6 rebounds per game as the Heat’s third option.  His ability to consistently shoot from mid-range, and get to the basket off of the pick-and-roll continues to be the x-factor for Miami and their quick start.

Bosh should be able to take advantage of the collection of big men the Bucks use.
Milwaukee uses the combination of a wise, but slow journey man center Samuel Dalembert as well as rookie John Henson who combined average less than 10 points per game, but also rely on utilizing a smaller lineup much like Miami with a traditional power forward playing center.

One of those is Turkish forward Ersan Ilyasova who is averaging 8.7 points and 5.5 rebounds per game as the scrappy cleanup man.

“That’s the best part about the league, if you stink it up you can come out the next night and redeem yourself,” Bosh said.

Although the Bucks find themselves in a three team battle for the lead in the Central Division and have been surprisingly successful thus far, expect the offensive attack of the Heat to simply be too much for Milwaukee to overcome as Miami rolls into 2013.