Miami Play Down to Their Competition Again, Drop Second Straight to New York 112-92 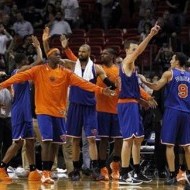 It was Miami’s worst home loss since the “Big 3” came together in 2010.  Steve Novak was doing his “discount double check” victory dance, Raymond Felton was slicing through the Heat’s interior defense as if he was running around practice cones, and Knicks fans inside the American Airlines Arena were chanting, “Let’s Go New York” at the end of Miami’s second straight loss to the New York Knicks.  With an injured Carmelo Anthony missing the game due to a left finger laceration, Raymond Felton scored a season high 27 points on 10-20 shooting to go along with seven assists and a blistering six three pointers. 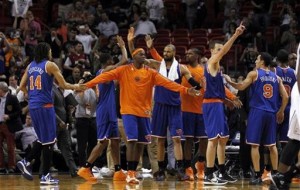 AP, "Eerily similar to Miami's last meeting with the Knicks, the reoccurring theme of the game was Miami's lack of perimeter defense combined with New York's hot shooting from beyond the arc."

On a more positive note, the Heat still had LeBron James.  James looked like a man possessed out there finishing with 31 points, 10 rebounds, and nine assists, one assist shy of yet another triple double.  The first quarter clearly belonged to the King himself as LeBron got off to a fast start, shooting 4-4 from the field, while facilitating the offense, and single-handedly providing the Heat with a narrow 26-23 lead to end the first quarter.

After the first quarter ended, James had his usual rest to start the second quarter and it seemed as if the entire fluidity of the Heat’s offense went with him to the bench.  With no James out on the floor to facilitate and lead the Heat offense, Miami looked out of sync and at times, abysmal.

The first bucket of the second quarter came on a Rasheed Wallace mid-range jump shot as the Knicks fans in the crowd shrieked “Sheed” everytime Wallace shot the ball.  After an array of missed jump shots and turnovers, the Heat checked back in LeBron James, who provided the Heat three easy layups within minutes along with a double alley-oop play that ignited the crowd.

Regardless of ignition or not, Miami’s lack of perimeter defense replayed itself like a broken record in the second half.  The only highlight on the Heat’s side even worth recalling in the second half was a monstrous LeBron James dunk that sent the crowd into a frenzy.

A pressing concern has been the play of Dwyane Wade as of late.  Wade finished the night with 13 points on 3-13 shooting to go along with four turnovers and an atrocious +/- of -33. Many journalists and analysts alike all seem to accredit Wade’s lack of production on the offensive end to his degrading athleticism.  The league wide notion is that if Wade wants to maintain his offensive output while compensating for his athleticism, he must develop a consistent and reliable jump shot or his numbers will continue to drop drastically.

Likewise, Chris Bosh finished the night with a lackluster 3-13 shooting, while getting punished inside the paint by the likes of Wallace and Tyson Chandler.  Wallace and Chandler combined for 25 points and 16 rebounds.  Nonetheless, while fingers can be pointed at certain players, the majority of the blame was on the entire Miami Heat team.

Recently, the Heat have had this overbearing championship attitude of “We’re better than our weaker opponents, so we don’t have to play as hard.”  Miami has now played a Knicks team without Anthony, the Washington Wizards, and a San Antonio Spurs team without Tim Duncan, Tony Parker, or Manu Ginobili, all games in which the outcome should have been a blowout in favor of the heat.  Quite frankly, this mindset that the Heat have been approaching has made them very vulnerable as of late.  It’s still early in the season so there is no sense in pushing the panic button now.  However, come playoff time if the Heat still approach teams with the same mentality, there may not be that “on/off” switch.