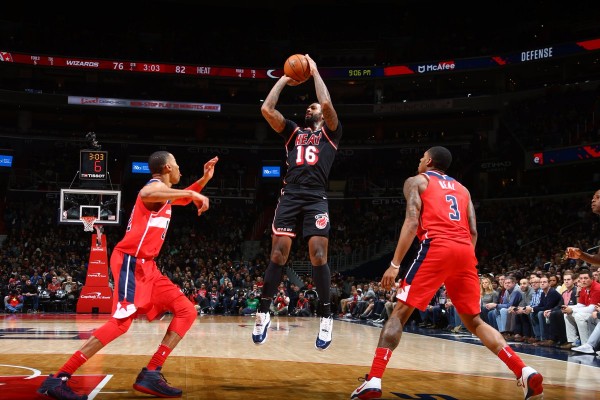 (Washington, D.C.) – All season long, the Miami Heat have shown the ability to play with the top teams in the NBA in some games and get bullied out of arenas in other games. In Friday night’s matchup against the Washington Wizards, the Heat displayed a little bit of both tendencies as they built a huge 25-point cushion in the first half only to watch it evaporate in the second half on their way to nearly blowing yet another close game. Thankfully, however, the Heat were able to toughen up in the waning minutes of the game to hang on to win, 91-88.

“It was pretty harrowing,” head coach Erik Spoelstra told reporters following the game. “Look, nothing is guaranteed in this league, but the process that this team is committed to, you know I respect that. To come in yesterday on a work day. To really spend a lot of time trying to fix some of the things that we’re going through. You know, we have a long ways to go, but the last 24 hours we have stepped in the right direction just in terms of our approach to get better.”

The final minutes of the fourth-quarter were filled with heart-pumping entertainment as Heat fans could do nothing but watch as Bradley Beal, who had 26 points, 10 rebounds, and four assists, helped his team battle back from their double-digit first-half deficit.

With 3:39 left in the game, the Wizards made their final attempt to snatch the victory from the Heat. The comeback attempt began when Beal hit a long 3-pointer to bring the deficit to six. James Johnson answered with a two-point shot of his own. The Wizards pushed back, however, and after two made free throws by Beal, a made layup by Marcin Gortat, and a 3-pointer by John Wall, who had an otherwise quiet night, the Heat’s massive first-half lead was cut to just three points.

Moments later, Dion Waiters proved his worth for the Heat as he hit a shot from behind the arc to extend the lead, 89-83. Beal answered with a three of his own, however, and after Otto Porter Jr. was sent to the line, it looked like the Heat were going to give up yet another last-second heartbreaker.

Johnson came to the rescue though, and made 1-of-2 free throws after being sent to the line to bring the lead back to two. With six seconds left on the clock, the Heat had to clamp down defensively just one more time to secure the much-needed win. The Wizards put the ball in Beal’s hands, and though he got open for an easy 17-foot look, he missed badly, allowing Justise Winslow to secure the rebound and the Miami win.

While the Heat showed many weaknesses on their way to the three-point victory, they showed just as many strengths when they built a double-digit lead in the first half. Johnson rebounded from several subpar games in a row to finish Friday’s contest with 20 points, five rebounds, and four assists.

Hassan Whiteside continued his impressive start to the season as well with yet another dominant game on both sides of the court. The 7-footer used his huge frame to overpower both Gortat and Jason Smith throughout the contest and finished with a monster 22-point, 16-rebound, and two-block performance.

Winslow also played well, helping the Heat push their first-half lead to 21 with 4:34 remaining in the half when he scored on two straight possessions in impressive fashion.

“It was great, you know those are the types of plays I’m trying to make, whether it’s a dunk, Euro (step), steal, block,” Winslow said after the game. “Just those type of plays to get the whole team going. That’s what I try to do, those energy to spark the team and get us into that flow.”

Throughout the game, the Heat showed an incredible ability to play team basketball with all 10 players scoring in the contest. Kelly Olynyk and Tyler Johnson both played admirably off the bench. Olynyk had five points and four rebounds in his first game in Capital One Arena since he helped the Boston Celtics bounce the Wizards in a Game 7 of last year’s NBA playoffs. Tyler Johnson added seven points, five rebounds, and three assists in a solid performance as well.

The Heat may have been lucky to get the win considering the way they played in the second half of Friday’s game. They also proved in the first half, however, that when they are on, they are very hard to beat.

Miami will look to build off of this victory and get back to .500 on the season when they host the Indiana Pacers on Nov. 19.
[xyz-ihs snippet=”HN-300×250-TextnImage”]