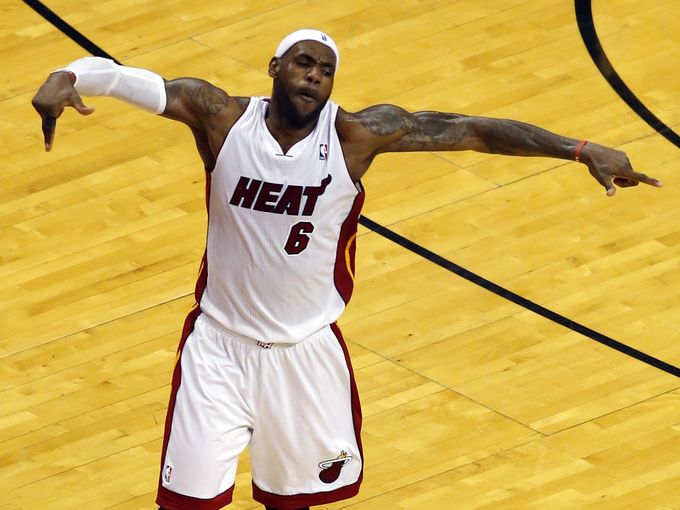 (Miami, FL)—Game three of the Eastern Conference Finals saw many twists and turns—in more ways than one.

After quickly jumping out to a double-digit lead early in the first quarter, the Indiana Pacers appeared to be in total control. Indiana’s fearsome frontcourt tandem of David West and Roy Hibbert were aggressive early, and the Miami Heat appeared sluggish and sloppy. After one quarter, despite a perfect early performance from the Pacers, Miami managed to trim the deficit to only seven points at the end of the first, and it appeared as if Miami was finally getting into the game after a tumultuous start.

Quarter by quarter, however, Miami continued to chip away, and part of it was thanks to switching the tempo and going to a full-court press after a leadfooted start which certainly favored the halfcourt pace of Indiana. “We had to get our energy going,” said Heat head coach Erik Spoelstra in the postgame press conference. “We can’t play the series on their terms. We had to get our guys going.” So that’s just what Spo did, and it came from timely subs and a little more intensity. To energize the team, Spo effectively injected more grit by subbing in Rashard Lewis in key instances to pester David West, and he opted to sub in Norris Cole in favor of Mario Chalmers to help kickstart the team in the fullcourt. “We started the game with mental breakdowns. Spo definitely pushed the right buttons.” Even LeBron James lauded Spoelstra’s adjustments in the postgame as far as shifting the pace of the game in Miami’s favor.

After a terrible second quarter that featured bone-headed turnovers from Indy and lockdown defense by the Heat, the Pacers’ vice-grip began to slip rapidly. What had been a comfortable double digit lead by Indy for much of the early goings, their lead was cut to only four points at halftime, and things kept getting better for Miami in the second half.

Numerous lead changes occurred in the third quarter as both teams traded huge baskets, but Indiana could never regain the momentum they’d held in the first half. Too many missed free-throws, and at some point, Indiana simply couldn’t match the explosive scoring ability of Dwyane Wade, LeBron James, and oh yeah, that old guy that used to be on the Boston Celtics—Ray Allen.

Allen was huge in this game, and perhaps huge is underselling how big he was for Miami. He finished with 16 points on perfect 4-for-4 shooting from behind-the-arc, and his three-pointers in transition and off of ball movement effectively pushed what was once a two-point Heat lead early in the fourth to an ultimately insurmountable 12-point victory.

Miami’s Chris Bosh didn’t look great whatsoever for most of the contest, but he finished strong in the waning minutes. Coach Spo noted that despite Bosh’s struggles, he still was big when it mattered most. “[Bosh] was a little out of rhythm… he was in foul trouble… and all of that culminated in a technical foul, but he made a couple big plays in the end and that’s all that matters.”

Despite Bosh’s pedestrian nine points on 4-of-12 shooting, Miami was able to have success thanks to a rejuvenated Dwyane Wade and ever-ready LeBron James. Wade eviscerated Indy’s defense to the tune of 23 points and it was yet another flashback (pun intended) of prime Wade. Even Coach Spoelstra noted how aggressive Wade looked from start to finish. “Each series is different. Each series is an animal unto itself…you just try and read the game. Dwyane understands that better than anyone. We need our scorers to be aggressive, and Dwyane is sensing that right now.” As Coach Spo noted, Wade brilliantly attacked, and he did so with tremendous efficiency. Dwyane shot 8-of-12 from the field, and he even knocked down two huge three pointers—something a little out of the norm for Wade.

While Wade looked cool and graceful, LeBron looked like a runaway freight train. LeBron splashed a couple huge buckets throughout the game, but he did a lot of his damage off of turnovers, and he did whatever the team needed in order to take it to the rack with authority—even finishing a spectacular and-one opportunity in the face of a helpless George Hill. LBJ along with the Heat’s collective defense swarmed and smothered the Pacers forcing them into 19 turnovers, and Miami successfully turned those turnovers into instant offense on the other end by scoring a whopping 26 points off of Indiana’s mistakes.

This game epitomized Miami Heat basketball. Miami wants their defense to get into the other team’s head, which in turn will cause opponents to cough up the ball. When they cough up the ball, the goal is to punish the other team, and punish them harshly. That’s exactly what Miami did, and it helped them take a commanding 2-1 lead over a reeling Pacers squad that desperately needs to step it up if they’re to have any chance of avoiding another clinic from the defending champs.