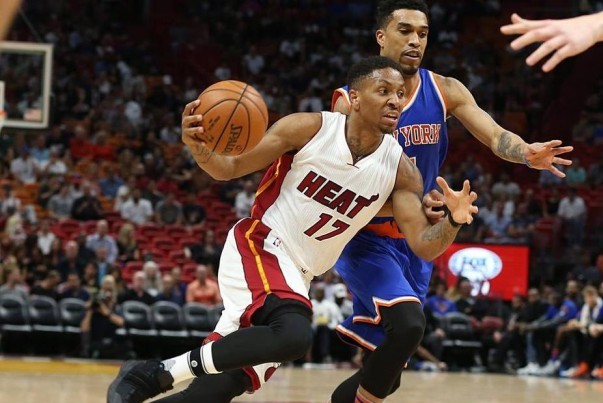 (Miami, FL) – Despite their relatively easy 105-88 road victory over the New York Knicks on Wednesday, the Miami Heat (37-39) were upset at home on Friday night as the shorthanded Knicks (29-47) held them off en route to a 98-94 win at American Airlines Arena.

Rising star power forward Kristaps Porzingis led the way for the Knicks with 22 points, seven rebounds, and three assists, while shooting guard Courtney Lee added 20 points of his own to go along with four boards and three steals.

In the loss for Miami, point guard Goran Dragic tied a game-high with 22 points (8-of-17 shots made from the field) and five assists, while star center Hassan Whiteside added another double-double to his resume with 17 points, a game-high 16 rebounds and two blocked shots.

“They hit some shots early. They knocked down a couple early shots and they got a big lead on us early in the game,” Whiteside said. “We were slowly trying to make up for that deficit.”

For the third consecutive home game, the Heat had an opportunity to get to the .500 mark and failed to do so. From the get-go, the Knicks jumped out to an early 15-4 lead and kept the Heat from jumping ahead by more than one point the rest of the game.

“It wasn’t necessarily sustained poor play. I mean, if you caught any pocket of this game you may say, ‘Man, that’s the hardest the Miami Heat have been playing,’ and then you catch pockets of the game where we had mental lapses and gave up easy baskets,” Heat head coach Erik Spoelstra said during his postgame press conference after the loss. “Obviously, setting the tone for the game at the beginning is vital. It doesn’t guarantee anything, but we were on our heels pretty much from that first timeout through the rest of the way. We just were never able to get to our identity and impose our will defensively.”

In a game in which they didn’t have the services of star small forward Carmelo Anthony and point guard Derrick Rose, the Knicks fought hard throughout the whole game against the Heat in order to keep them at bay defensively.

As a team, the Heat shot a dismal 8-of-33 from the three-point line and 18-of-25 from the charity stripe, while the Knicks went a nearly-perfect 16-of-17 from the free-throw line.

Shooting guard Tyler Johnson and power forward James Johnson came off the bench to score 15 and 12 points for the Heat, respectively, while small forward Rodney McGruder had 11 points, five rebounds and four assists.

With just six games remaining on their regular season schedule, three at home and three on the road, the Heat will host the Denver Nuggets (35-40) on Friday night in hopes of making the playoffs. The game is scheduled to tip off shortly after 6:00 p.m. ET at American Airlines Arena and will be broadcast live locally on Fox Sports Sun and nationally on NBA TV.
[xyz-ihs snippet=”Responsive-ImagenText”]