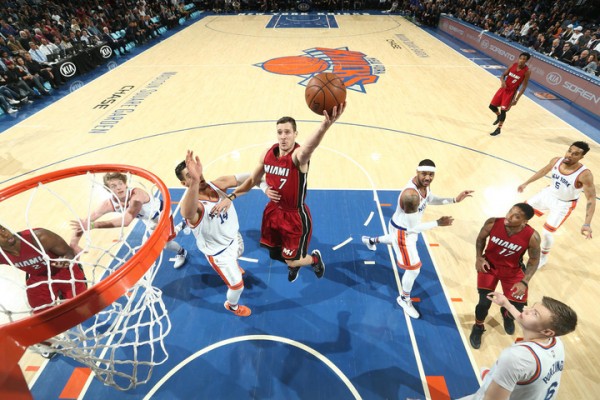 (New York, NY) – In the second game of an important back-to-back slate, the Miami Heat (37-38) cruised to a 105-88 victory over the reeling New York Knicks (28-47) on Wednesday night at the world-famous Madison Square Garden.

“Most of the teams in this league, they use excuses. You know, they may be like ‘We came late, we came in at 2:00 a.m., it’s a back-to-back, or we don’t have some key players,’ or something,” Dragic said after the win. “But we don’t function like that. We try to win every game that we can. We have some tough back-to-backs that we lost, be we try to fight to the end and win every game.”

Shooting guard Josh Richardson, who continues to do a fantastic job filling in for injured starting guard Dion Waiters, was a master on both the offensive and defensive end en route to 17 points and a whopping five steals.

“Well, in the second half, we showed more energy but also more connection. We weren’t communicating well with each other in the first half. A litte frustration and not doing the little, tough things that we needed to do that really have been a staple to our identity,” Heat head coach Erik Spoelstra said. “But it was much better in the second half, I liked the activity.”

“I feel unstoppable, really,” Johnson said. “When you’ve got the big dog (Whiteside) saying stuff like that, you know he’s got your back.”

The Knicks were officially eliminated from Eastern Conference playoff contention after Wednesday night’s loss, as they continue to underachieve and deal with injury woes throughout the 2016-17 season.

With only seven games remaining on their regular season schedule, the Heat will return home to take on the Knicks again on Friday night in yet another contest they must win. The game is scheduled to tip off shortly after 8:00 p.m. ET at American Airlines Arena and will be broadcast live locally on Fox Sports Sun.
[xyz-ihs snippet=”Responsive-ImagenText”]