Fresh off of a satisfying and thorough opening night victory over the rival Boston Celtics, the Heat now turn their attention to another Eastern Conference challenger when they head to the Big Apple to take on the New York Knicks on Friday night. 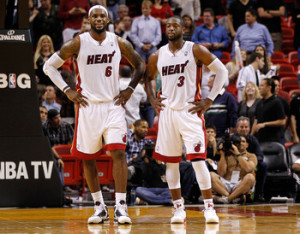 Getty Images, "James’ vast array of skills were on full display in Tuesday’s win over Boston, as the reigning league MVP scored 26 points on 10-of-16 shooting with 10 rebounds in just 29 minutes before leaving the game in the fourth quarter with leg cramps."

Because of the postponement of the Knicks’ scheduled opener against the Brooklyn Nets due to Hurricane Sandy, the game will mark the season debut for a Knicks team looking to make the leap into the upper tier of the Eastern conference this year.

While veteran stars like Carmelo Anthony and Tyson Chandler are far from strangers to Miami, the Knicks will have a new-look backcourt with Raymond Felton, Jason Kidd, and Ronnie Brewer taking the place of departed guards Jeremy Lin and Landry Fields and the injured Iman Shumpert.

The Knicks will also be without starting power forward Amare Stoudemire, who is out six to eight weeks with a knee injury.

Anthony’s strength and versatility make him a tough cover for most NBA power forwards. Fortunately for the Heat, they possess the most versatile and athletic forward in the league in LeBron James.

James’ vast array of skills were on full display in Tuesday’s win over Boston, as the reigning league MVP scored 26 points on 10-of-16 shooting with 10 rebounds in just 29 minutes before leaving the game in the fourth quarter with leg cramps.

Though the Celtics made a run to cut an 18-point lead to four in the final period, the Heat answered by scoring the game’s final nine points to hang on for the win.

After the game, Heat coach Erik Spoelstra said that he remained confident that his team’s improved roster had the talent and depth to overcome the loss of James in the fourth. “We feel we have enough versatility to be able to mix and match,” he said. “We had to find a way to win without LeBron, and hopefully we don’t have to do that for too long.”

It was about as perfect of a debut for Miami newcomers Ray Allen and Rashard Lewis as they could’ve hoped for, with the duo combining for 29 points on 9-of-12 shooting and 3-of-5 from the 3-point line.

Allen displayed an ability to handle the ball and create his own shot, and Lewis showed an ability to score in the paint rebound from the power forward position, giving the Heat even more versatility in the backcourt and the frontcourt.

With a slew of multi-positional players, the Heat appears equipped to play any style necessary using a wide variety of roster combinations.

Spoelstra said that employing the many weapons at his disposal in different ways depending on the matchup from night to night is made easier by the approach of his veteran players.

“The most important thing is to have a group of professionals and brothers in the locker room who are willing to sacrifice and be mature about it,” he said. “You can have all the versatility in the world on your basketball team, but if you’re handcuffed to have to play certain combinations because of guys’ egos, it’s going to be tough.

“But our versatility works because our guys have great maturity and perspective in there. Sacrifice isn’t just a word for them. The bottom line is winning.”

Another veteran that looked in mid-season form was Dwyane Wade, who scored 29 points on 10-of-22 shooting in his first regular season game since his off-season knee surgery. Spoelstra said Wade’s performance after a mostly inactive summer due to the surgery was a testament to the two-time NBA champion’s work ethic.

“He did his part to make sure he came into camp in the best condition he could without being able to run,” he said. “We were able to fast-track him. Like we’ve said, you will see the explosiveness and quick-twitch from Dwyane Wade this season you were not able to see during that playoff run.”

After facing a hard-nosed defender in Boston’s Courtney Lee in the opener, Wade will likely see a lot of Brewer on Friday night.

The former Bulls guard who has been a pretty effective defender against Wade throughout his career.

But the game will likely come down as it did in last year’s first round playoff series to the ability of the Knicks to consistently get stops against the Heat’s high-powered offense, which topped 100 points in three of the four playoff victories.

Miami averaged 98.1 points per game in its seven combined regular season and playoff wins over New York last year, and scored 87 in its only loss.

If the ball movement and perimeter shooting the Heat displayed against Boston carries over to Friday, the Knicks will have a hard time generating enough offense to keep pace.