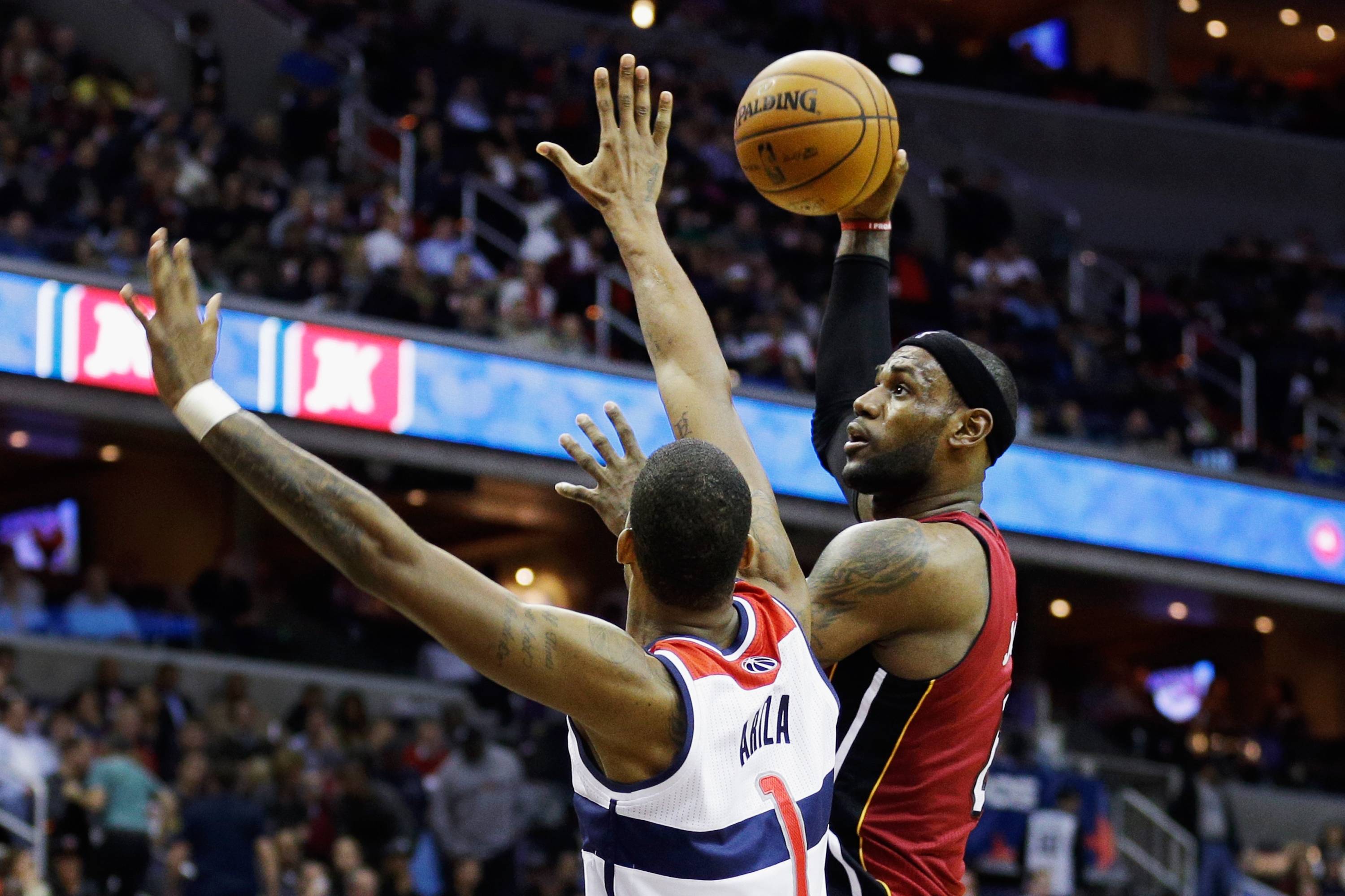 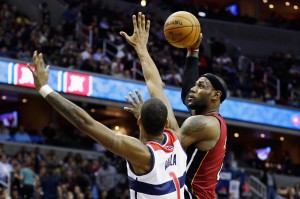 Getty Images, "For James it was an eventful start to the week, as he was named Sports Illustated’s Sportsman of the Year on Monday after his historic 2012 campaign but failed to deliver in the final seconds in Washington. "

LeBron James recorded his 33rd career triple-double but missed two go ahead three point attempts in the final 19 seconds as the Miami Heat’s six game winning streak was snapped in a shocking 105-101 loss to the Washington Wizards.

For James it was an eventful start to the week, as he was named Sports Illustrated’s Sportsman of the Year on Monday after his historic 2012 campaign but failed to deliver in the final seconds in Washington.

James finished with a team-high 26 points, 13 rebounds and 11 assists.

Coming off of his 34 point, seven assists performance against the Brooklyn Nets on Saturday, Dwyane Wade got out to a fast start, scoring nine points in the first quarter but Miami (12-4) played sluggish defensively in the opening frame and trailed 30-25.

The 30 points scored by Washington (2-13) was the most they have scored in the opening quarter of a game this season.

Wade finished with 24 points for an encore performance, and seems to have returned to his “Flash” counterpart of yesteryears.

As it was against the short handed San Antonio Spurs and Cleveland Cavaliers, it was yet another instance where Miami played down to their competition, a team they should of ran out of the gym from the start.

But it was the fast paced offense that Washington mimicked from Miami that caught the Heat off guard and led to the Wizards second win of the season.

Wizards’ sixth man Jordan Crawford finished with 22 points for a Wizards team that shot 58.0 percent from the field in the first half, well above their league worst average of 40.3 percent.

After trailing 60-54 at halftime, Miami was down by as many as 12 at 71-59 in the third quarter before the combination of James and Wade cut the lead to 82-78 entering the fourth quarter to set up the potential comeback.

Chris Bosh notched his sixth double-double of the season with 20 points and 12 rebounds but was a non factor in the final minutes.

Both Shane Battier and Norris Cole were out with injuries, and the injury bug continued to plague Miami.

Midway through the second quarter, point guard Mario Chalmers injured his left hand while receiving a pass from Ray Allen heading straight to the locker room and did not return.

With both Cole and Chalmers out, and no other true point guard on the roster, James carried the load to facilitate the Miami offense.

Continuing to flourish with the second unit, Ray Allen had 11 points as did Mike Miller, who saw more playing time due to the plethora of injuries.

Filling in for injured star point guard John Wall, A.J. Price had struggled to put up consistent numbers on the offensive end, but had nine of his 14 total points in the first quarter.

Notching a double-double himself, forward Kevin Seraphin finished with 16 points and 10 rebounds off of the bench.

Coming into the game, Washington ranked atop the NBA in bench scoring with 45.0 points per game and the combination of Crawford and Seraphin continued to spark the offense, outscoring the Heat’s bench 64-31 and also 16-6 in fastbeak points. .

Washington has beaten Miami three straight times dating back to last year but these teams will battle again on December 15 in South Beach were Miami remains undefeated at home.

The Heat will travel back to South Beach for a showdown of the two top teams in the Eastern Conference against the New York Knicks on Thursday.