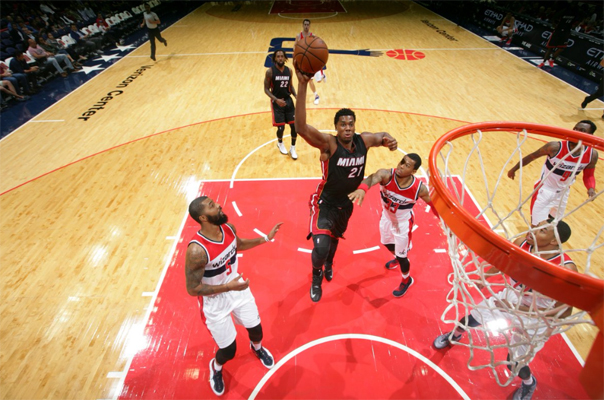 (Washington, DC) – After losing legendary shooting guard Dwyane Wade in the offseason due to free agency, the Miami Heat (1-0) looked very sharp in their first game of the 2016-17 preseason and cruised to a 106-95 win over the Washington Wizards (0-1) on Tuesday night at Verizon Center.

Miami was led by rising star center Hassan Whiteside, who put on a show en route to a double-double in the nation’s capital with 20 points (9-of-12 shots made from the field), 13 rebounds and three blocked shots.

In just the first half alone, Whiteside dominated the Wizards on both ends of the court as the center had 18 points (8-of-10 shots made in the first half), eight boards and three blocks.

“All the guys understand there are opportunities right now,” Miami head coach Erik Spoelstra said before tonight’s contest against Washington. “What we’re trying to do is get everybody on the same sheet of music and understand how we want to play, what’s important to us. It’s also our job as a staff to maximize the guys and try to get them to play into their strengths.”

With the Heat already out to an early 15-14 lead halfway through the first quarter, Whiteside and small forward Justise Winslow (who finished with 12 points of his own) pulled off a play that got many Heat fans excited for things to come.

The new additions to this season’s Heat roster also made their mark on the night, as small forward Luke Babbitt had 14 points (4-of-5 from three-point range) and four rebounds, while shooting guard Dion Waiters had a great debut for Miami with 12 points and a team-high eight assists.

“I think we came out with a lot of energy. We moved the ball, played together and most importantly had fun,” Waiters said. “I know my abilities and I just got to stick to it and continue to just keep working hard, finding my teammates and just making the right play.”

The Wizards, who played from behind without All-Star point guard John Wall for most of the night, were led in scoring by point guard Trey Burke, who finished the evening with 14 points and five assists. Shooting guard Bradley Beal had 12 points and two boards, newcomer power forward Markieff Morris added 11 points, four rebounds and three assists, while Gortat added 10 points and six rebounds of his own for Washington.

Up next, the Heat will host the Minnesota Timberwolves in their second preseason game on Saturday night at Sprint Center in Kansas City, MO. The contest, which is scheduled to tip off shortly after 8:30 pm ET, will be broadcast live only on the radio by tuning in to AM 790 The Ticket.
[xyz-ihs snippet=”Responsive-ImagenText”]