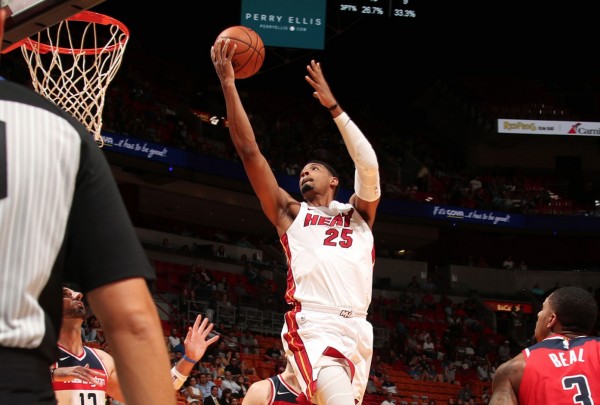 (Miami, FL) – On a night without the services of their top three players, the Miami Heat (3-2) rallied to pull off an epic 117-115 preseason victory over the Washington Wizards (3-1) on Wednesday at AmericanAirlines Arena.

Miami head coach Erik Spoelstra decided to rest guards Goran Dragic and Dion Waiters as well as star center Hassan Whiteside on the night, but the Heat had a handful of players who rose to the occasion and proved their value to the organization going forward.

Forward Jordan Mickey, who played his first two seasons in the NBA with the Boston Celtics, hit the game-winning 3-pointer with just 1.3 seconds left in regulation.

Mickey, who was signed in late August by the Heat, capped off a great night with 12 points, six rebounds and two steals in the victory.

“I just got my work done all summer and shot it with confidence,” Mickey said immediately after the game. “As a player, you’ve got to always think every shot is going in.”

Against Washington’s top players, the Heat climbed their way out of an early deficit and simply refused to let the Wizards pull away in the second half.

“A bunch of young guys just playing hard trying to make a way for themselves. We just didn’t give up no matter what the score was, we just kept playing hard and always grinding,” Mickey said.

As the Heat trailed 32-19 in the second quarter, guard Josh Richardson (13 points and two rebounds on the night) sparked what would become a 14-2 Miami run when he threw down a thunderous alley-oop dunk over Washington forward Kelly Oubre Jr.

Down the stretch in the fourth quarter, the duo of guards Matt Williams and Derrick Walton Jr. hit numerous clutch shots to keep the Heat within striking distance of the Wizards. Williams and Walton Jr., who both finished with nine points apiece, each made three shots from behind the arc on a combined 6-of-10 shooting from three-point range.

During the breakout performance by the handful of unlikely Miami heroes, the Heat core players were seen on the bench multiple times, ecstatic over their teammates’ successful comeback effort.

Heat big man Bam Adebayo, who was drafted 14th overall in the 2017 NBA Draft out of the University of Kentucky, had his best game of the preseason as he scored 15 points (6-of-10 from the field and 3-of-4 from the charity stripe) and nabbed two boards in 23 minutes of action.

Miami also had key contributions from guard Tyler Johnson and forward James Johnson off the bench, who finished with 14 and 12 points respectively in limited minutes.

For the Wizards, forward Jason Smith was a force to be reckoned with on the night as he went off for a game-high 20 points. Washington, which gave a good deal of minutes to star guards John Wall and Bradley Beal on Wednesday night, could not put Miami away for good en route to its first loss of the preseason.

In their upcoming final game of the preseason on Friday night, the Heat will take on the Philadelphia 76ers (1-3) in Kansas City at Sprint Center. The contest, which is scheduled to tip off shortly after 8:30 p.m. ET, will only be broadcast over the radio on AM 790 The Ticket.
[xyz-ihs snippet=”Responsive-ImagenText”]