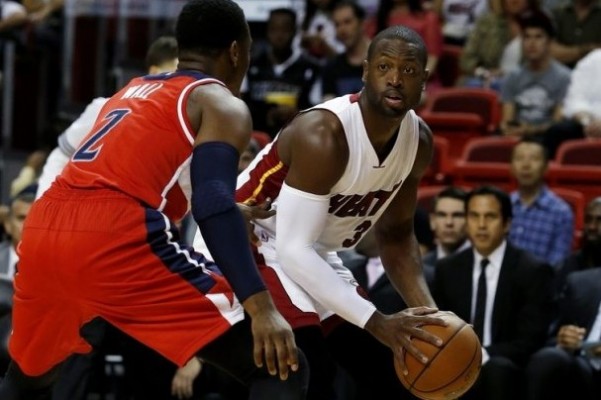 Despite losing by 11, the final score was not indicative of how close the game was down the stretch.

With the Heat down 105-103 and after what looked like the referees missing a traveling violation by Wizards All-Star shooting guard Bradley Beal, Beal found shooting guard Gary Neal in the corner to drain a clutch three-pointer as the shot clock expired with only 1:07 left in the game.

Clearly frustrated by the officiating in an already great game, Heat power forward Chris Bosh (18 points, nine rebounds, four assists and two blocked shots in 36 minutes) was ejected with 28 seconds left for arguing with the referees.

“It was a travel. No need to watch it,” said Bosh in the Heat locker room. “I know what happened.”

Even though the game was tied at 103-103, the Heat simply couldn’t recover from mistakes and questionable calls as the Wizards kept their foot on the gas pedal for the closing minutes of the contest.

“As a team, we just didn’t pay attention to detail. We weren’t communicating well enough on our calls,” said 11-time All-Star Dwyane Wade after the game. “And we didn’t do a good-enough job of taking the 1-on-1 challenge.”

In the first half, the Heat found themselves down by as many as 14 in the second quarter before they cut the deficit to 60-55 at halftime.

“From the beginning, they had us on our heels by driving and kicking,” said Heat head coach Erik Spoelstra on the Wizards offense. “You have to give them credit. They made a lot of plays, made it tough, and really attacked the paint like we haven’t been attacked probably all year. Defensively, that was probably our worst game of the year.”

Miami’s shooting guard looked like his vintage self, as Wade racked up a team-high 26 points to go along with nine assists and seven rebounds. At one stretch in the game, the 11-time NBA All-Star made eight straight field goal attempts. Point guard Goran Dragic also added 20 points and nine assists, while center Hassan Whiteside had 14 points, four boards and three blocks.

Up next, the Heat will hit the road to take on the Charlotte Hornets (12-8) at Time Warner Cable Arena on Wednesday night. The contest, which will tip off shortly after 7:00 pm ET, will be broadcast live locally on Fox Sports SUN.
[xyz-ihs snippet=”Responsive-Ad”]