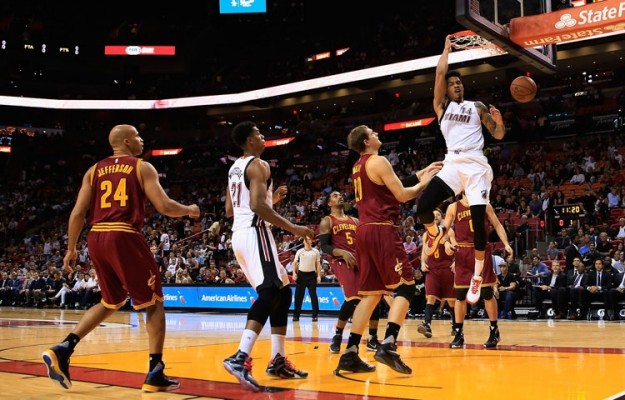 (Miami, FL) — The Miami Heat (12-6) defeated the Cleveland Cavaliers (13-7), 99-84, in a matchup of the two best teams in the Eastern Conference on Saturday night at American Airlines Arena.

While the game was a matchup of two of the best teams in the East on paper, that was hardly the case on the court—four-time MVP LeBron James missed the game for the Cavaliers due to rest, his first absence of the season. The 35-year-old Richard Jefferson started at small forward in James’ place.

It was clear from the opening whistle that Cleveland was tired and outmatched. The Heat led 34-22 at the end of the first quarter and led 60-42 at the half. Miami converted on 66 percent of their shots in the first half, while Goran Dragic had his best performance of the season in scoring 15 points before halftime. Dragic finished with 17 points and eight assists on 7-of-11 from the field.

While the Heat had a day off following their 97-95 victory over the Oklahoma City Thunder on Thursday night, the Cavaliers didn’t have the same luxury—they were coming off of Friday’s overtime loss to the New Orleans Pelicans.

The Heat had five total players in double figures, with Dwyane Wade and Tyler Johnson leading the charge at 19 points apiece. Chris Bosh had 14 points, while Gerald Green added 12 as he filled in for Luol Deng (hamstring) at small forward for the fourth consecutive game.

With Dragic running the offense, the Heat were excellent in their execution. He commented on his improved play since struggling early on in the season:

“I know where I need to pass the ball to D-Wade, to Chris Bosh, it’s a working process, it takes time. I was a little bit in a slump, but now it’s over.”

The game was defined with scoring runs throughout the evening. Miami began the second half on an 8-0 run to boost their lead to 68-42. The Heat weren’t the only ones to go on a scoring binge, however, as Cleveland went on a 13-3 scoring run midway through the third quarter to cut their deficit to 16 points. The Cavaliers would go on a 13-0 scoring run late in the fourth, only to still be down 93-79.

“A good professional win. I liked our guys’ approach to it. Obviously, they’re coming off of an overtime loss, getting to the city late, and James wasn’t playing. So that obviously changes things, but you still have to go out there and compete and play the right way and I think our guys approached the game the right way to build habits and get this win at home.”

The Heat led by as many as 27 points, while the Cavaliers led just once when Timofey Mozgov converted on a dunk to put Cleveland up 8-7 with 8:19 remaining in the first quarter.

Jefferson led a stagnant offensive attack for Cleveland, scoring 16 points in his first start of the season. J.R. Smith had 12 points, while Kevin Love was a complete non-factor in scoring five points on 2-of-11 shooting. The Cavaliers converted on just 36.5 percent of their shots, while Miami shot 54.4 percent from the field.

After Wade scored 58 total points in Miami’s past two games, Spoelstra sat No. 3 during the entire fourth quarter with the result essentially decided. The Heat’s head coach spoke of how important it was to have Wade rest, and also cited the desire to have Bosh receive more rest along the way:

“I wish we could have gotten CB those minutes off. But tomorrow will be family and football day, so he can rest all day long.”

At the conclusion of the Heat’s victory over the Cavaliers, they held the best record in the Eastern Conference with a winning percentage of .666.

Miami will remain at home as they take on the Washington Wizards on Monday night at American Airlines Arena. Tipoff is set for 7:30 EST and the game will be broadcast locally on Sun Sports.
[xyz-ihs snippet=”Responsive-Ad”]