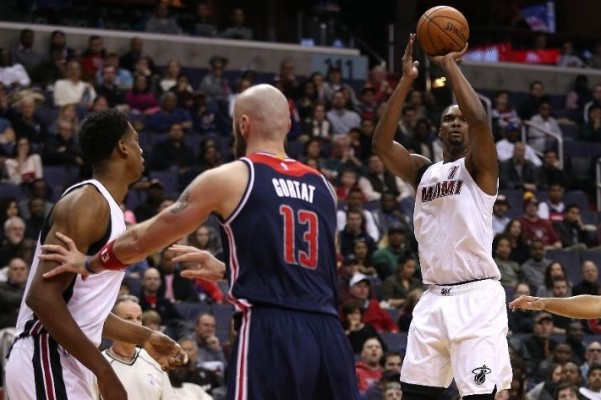 (Washington, DC) – Taking advantage of the ice-cold shooting of their opponents, the Miami Heat used solid defense to notch their second straight victory in an easy 97-75 win over the Washington Wizards at Verizon Center on Sunday night.

The two teams had virtually an identical opening quarter in regards to statistics, but that changed drastically once the second period began. Over the course of those 12 minutes, the Wizards hit on just over nine percent of their field goal attempts (2-of-22), turning what had been a one-point deficit at 25-24 into a gaping 50-31 advantage for the Heat when the halftime horn sounded.

The seven points for Washington during the quarter came on three free throws and a pair of field goals. Prominent among the Wizards held in check was guard John Wall, who missed on all eight of his shots in the period. The seven points in the quarter marked the second lowest total for a Miami opponent in team history.

“We went under against him and didn’t pre-rotate,” said Dragic.

Whiteside’s performance had Miami head coach Erik Spoelstra pinpointing after the game when the center’s and the team’s season had changed for the better:

“After the last loss to Washington and the work we put in the next day,” said Spoelstra.

Despite his own strong effort, Bosh concurred with Spoelstra on Whiteside’s effort on the evening by noting his potential:

“He can dominate without even scoring a point,” said Bosh.

When play resumed to start the third quarter, Washington quickly connected on their first two shots, but then missed nine of their next 11 attempts. That lack of production helped Miami keep a lead of at least 14 points for the rest of the game, eventually holding a 73-51 lead after three quarters.

Any chances of making great strides in chopping the margin down were negated due to the Wizards’ 4-for-28 shooting (14.3 percent) from long range. In that final quarter, the Heat lead would go as high as 30 points at 89-59 before Washington was able to chip away during garbage time. For the game, the Wizards were held to just 34 percent shooting from the field.

The victory improves the Heat’s season record to 20-13, while Washington drops to 15-17 on the year.

The Heat now return home for a Monday night matchup against the Indiana Pacers, with tipoff set for just after 7:30 p.m. ET.
[xyz-ihs snippet=”Responsive-Ad”]