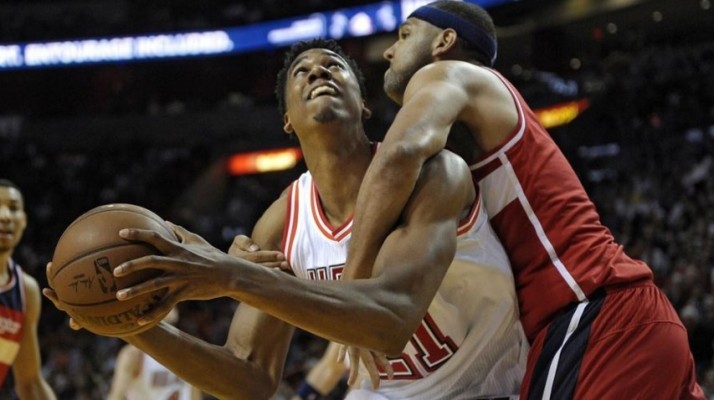 (Miami, FL) – Taking full advantage of the fatigue of their opponents, the Miami Heat were able to use a monster game from center Hassan Whiteside to put together an easy 114-94 victory over the Washington Wizards at American Airlines Arena on Saturday night.

Whiteside came off the bench ready to play after sitting out Friday night’s contest due to suspension. He picked up a double-double with 25 points (on 11-of-15 shooting) and 23 rebounds and added two blocked shots in 29 minutes of action.

Joining Whiteside in the double-double category was Luol Deng, who scored 27 and grabbed 10 rebounds, giving him 57 points in his last two games. Meanwhile, Goran Dragic provided the bulk of scoring in the backcourt while flirting with a potential triple-double, ending the evening with 24 points, eight assists and seven rebounds.

Deng spoke in the postgame locker room about what’s been working for the team:

“We’re just moving the ball. We’re cutting,” Deng said. “We’re helping each other and creating for each other.”

Dragic spoke of the issues involved in trying to better blend different styles and the difficulty in speeding up the game:

“I’m not worried about it. We’re going to be fine,” Dragic said. “It’s really tough to play fast and to defend.”

The tired Wizards were playing a contest for the third night in a row, the byproduct of having to play a makeup contest on Thursday night against the Utah Jazz. The end result was Washington falling behind early and and never being able to put together a strong comeback effort.

The fatigue and Whiteside’s prowess on the boards helped the Heat dominate the rebounding category, closing out the night with a 67-45 advantage. His scoring and rebounding combination marks only the third time since the early 1980’s in which an NBA player has scored at least 25 in a game, while hauling down at least 20 rebounds in less than 30 minutes of play. The other two players who have done this are Bill Laimbeer and former Miami center Alonzo Mourning.

“He was fantastic tonight with all the little things,” Spolestra said. “The next challenge is consistency.”

Less than 90 seconds after the game had started, the Heat trailed 5-2. However, from that point on, Miami dominated, starting with a 28-14 run to finish the quarter to lead by a 30-19 score.

Washington could only slice their deficit by a single basket before a 16-5 run gave the Heat a 50-30 advantage with 4:06 to go before intermission. Miami finally poured it on in the final quarter to lead by as much as 23 points on multiple occasions.

Spoelstra was asked about afterwards about the team’s pace:

“I don’t know exactly where it will fall, but you have to play to the strengths of your personnel,” Spoelstra said. “I know this is fun and this is what the fans want to see.”

Dwyane Wade was unable to play again due to soreness in his left knee. Before the game, Spoelstra spoke about Wade’s situation:

“He had an MRI this morning,” Spoelstra said. “Everything came back negative. He’ll be day-to-day from here. He’s already starting to feel better.”

Despite Wade and Chris Bosh‘s absences, no excuses were forthcoming when Spoelstra was asked about the current injury troubles:

The Heat improved their record to 31-24 with their second straight victory, while the Wizards dropped to 25-29 while seeing their own two-game winning streak come to an end.

Miami stays at home for a Monday night matchup against the Indiana Pacers that will tip off just after 7:30 p.m. ET.
[xyz-ihs snippet=”Responsive-Ad”]