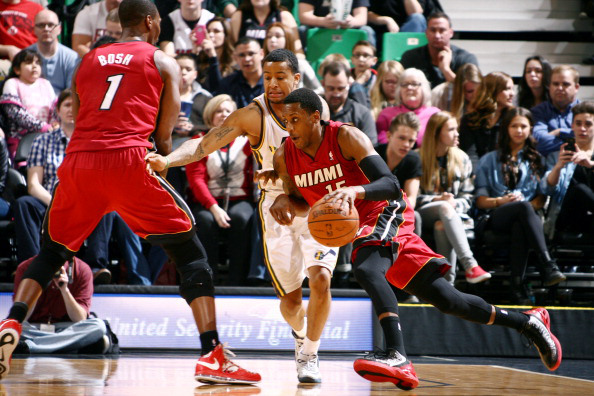 (Salt Lake City, UT) — The Miami Heat (10-12) look to end their road trip with a victory as they take on the Utah Jazz (6-16) at EnergySolutions Arena on Friday night.

The Heat are coming off one of their worst losses of the season following their 102-82 defeat at the hands of the Denver Nuggets on Wednesday night. Miami shot a season-low 36.6 percent from the field and struggled in the second half despite entering halftime tied at 48-all with Denver.

Erik Spoelstra cited a lack of “juice” for the team’s lackluster performance versus Denver:

“By the end of the third quarter it just started to get too far into the double digits. We just didn’t have enough juice. Whether it’s because of Tuesday night or the competition or whatever, we didn’t have enough.”

Superstars Chris Bosh and Dwyane Wade both struggled in the loss as they combined for just 24 points. Both players were averaging over 21 points per game, while Bosh was coming off a 34-point performance in the victory over the Phoenix Suns on Tuesday night.

Wade attributed the team’s struggles on Wednesday to the altitude in Denver:

“This is the worst back-to-back in the league. You come in to see what you can do. You try to come out and compete. We did that for a half and then it got away from us in the third quarter. It was one of those games.”

Bosh stressed that the team needs to take better care of the ball due to the difficulties of playing back-to-backs:

“It’s difficult man. Very, very difficult for a bunch of reasons. That’s why we have to take care of the ball and execute.”

Unfortunately for Miami, the Heat might not have Wade for Friday night. The star guard is struggling with an illness and he is officially considered questionable versus the Jazz.

To make matters worse, Josh McRoberts has been ruled out for tonight’s game with a knee injury. With McRoberts out yet again, Justin Hamilton may be forced into the starting lineup for a second consecutive game due to Chris Andersen remaining out with a sprained ankle injury.

“They both did some nice things. They both do it in a different way. Justin is a very intelligent in-the-right place type of defender. Whiteside is big and has a gift for blocking shots.”

While the Heat have struggled in losing six of their past seven games, the Jazz have also been a team on the decline. Utah recently ended a nine-game losing streak by defeating the defending champion San Antonio Spurs, 100-96, on Tuesday night. Starters Gordon Hayward, Derrick Favors, Enes Kanter, Trey Burke and Alec Burks combined for 75 points in the victory.

Jazz coach Quin Snyder believes every victory for his young squad is a step in the right direction:

“Having your work and your effort and your direction affirmed with a win is a good thing. I just want us to keep playing. We’re playing to get better. That’s how I see it.”

Utah is still a team looking for its true identity. The Jazz are below-average in every major team category, ranking 21st in points, 25th in rebounds, 21st in assists and 23rd in points allowed.

Hayward leads the squad with 18.9 points per game, while Favors averages 16.2 points and 8.5 boards a contest.

Tipoff is set for 9:00 EST and the game will be broadcast on Sun Sports.
[xyz-ihs snippet=”Red-Arrow”]