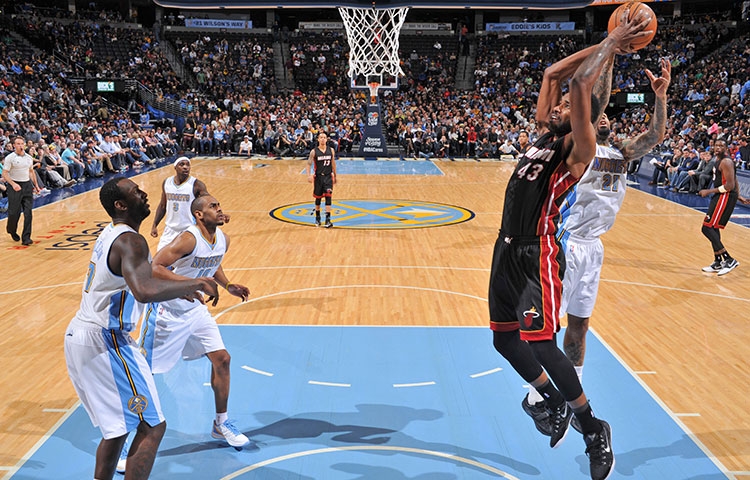 After going into halftime tied at 48-all, the Heat were badly outplayed in the third quarter. During the decisive quarter, the Nuggets outscored the Heat by a total of 17 points. Miami shot just 28 percent in the third, and Denver entered the final period with a 79-62 lead. By the time the fourth quarter began, the Heat had already given their best shot.

Dwyane Wade struggled as he scored just 10 points on 4-of-15 shooting. He entered the contest scoring nearly 22 a game, but he registered the worst plus/minus rating of any player in the game with a -23 mark. Just about all of the Heat struggled offensively, as Chris Bosh notched just 14 points and two rebounds in 34 minutes of action just a day after scoring 34 points in a victory over the Phoenix Suns. Luol Deng had 12 points on 10 shot attempts.

Denver was led by a balanced offensive attack that saw five players score in double figures. Wilson Chandler led the squad with 17 points and eight rebounds, while Ty Lawson nearly posted a double-double with 10 points and nine assists. Arron Afflalo complimented the scoring punch by providing 16 points on 6-of-8 shooting.

In what is quickly becoming a trend for the Heat, Miami played their opposition evenly in the first half before drastically falling off in the latter half. Whether it’s due to playing in the midst of a five-game road trip or if it’s just a matter of the Heat being a mediocre team, Miami can’t seem to sustain their play for a full 48 minutes.

Bosh commented on the team’s second half struggles versus the Nuggets:

“I think offensively we didn’t get the ball where it needed to go. We didn’t work the offense much. We got into some quick shots that really hurt us. We turned the ball over, we played into their hands. They played really good defense tonight. We didn’t have easy buckets or open looks. They played off the miss all night. They played their game, we didn’t make them play our game.”

Wade admitted that he didn’t feel any rhythm during tonight’s loss:

“Third quarter was a terrible quarter….I don’t think a lot of guys felt in rhythm. I know I didn’t. I shot a couple of shots just to shoot it toward the end. We’ve got to do a better job at helping each other get in rhythm.”

This game featured a couple of Nuggets runs that made the Heat look dismal in comparison. Denver started out the game with a 16-4 lead and began the third quarter on an 11-2 run within the first three minutes of the second half.

Coach Erik Spoelstra was asked following the game about the Heat’s recent trend of being blown out on the road. Spoelstra answered with the following:

“You certainly don’t like it. But I wouldn’t necessarily compare this to the other losses. We’ve made some progress on this road trip. Our focus now will be to end this trip on a good note with a win.”

The victory ended a four-game losing streak for the Nuggets, while Miami failed to capitalize on their 103-97 victory over the Suns from the night before.

Josh McRoberts missed the game due to a bruised right knee. Justin Hamilton made his first career start in place of McRoberts. He scored four points and grabbed seven rebounds on 2-of-5 shooting in 22 minutes of playing time.

With the Heat trailing 93-68 at the 5:54 mark of the fourth quarter, Hassan Whiteside made his second appearance with the Heat since being signed to the active roster a week prior. Whiteside scored six points on 3-of-3 shooting including an alley-oop dunk off a Danny Granger pass.

The Heat will look to rebound by concluding their road trip with a victory over the Utah Jazz (6-16) at the EnergySolutions Arena. Tipoff is set for 9:00 pm EST on Friday night and the game will be broadcast on Sun Sports.
[xyz-ihs snippet=”Red-Arrow”]