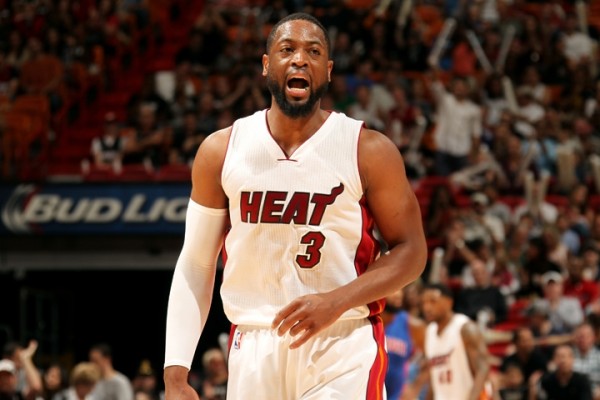 (Miami, FL) — With a handful of other teams in the Eastern Conference breathing down their necks, the banged-up Miami Heat (34-39) held on late to a much-needed 109-102 victory over the Detroit Pistons (28-45) on Sunday night at American Airlines Arena.

Dwyane Wade, who just had fluid drained yesterday from his aching left knee, exploded for a 40 points, six rebounds and four assists on the night while coming two points short of tying his season-high in scoring.

“You just do whatever you can and we’ve got great doctors, so you listen to what they say,” said Wade. “After getting banged in my knee, it swelled up and I was able to get some fluid out and get some rest yesterday. I’m feeling good enough to help my team get a win.”

In 13 games played for the seventh-seeded Heat in March this year, the 33-year old Wade continues to score at will, as he averages 25.23 points per game in that span.

“We needed a win at home and we had a lot of guys out tonight,” said the 11-time NBA All-Star shooting guard after the game. “We lost Luol Deng midway through the game, so you have to have will and we had that tonight.”

Being the only two players on the current roster who contributed to all three of Miami’s three NBA Championship titles, Wade and 12-year Heat veteran Udonis Haslem combined to score 58 of their team’s 109 points.

“Our two co-captains really led us and set the tone,” said Heat head coach Erik Spoelstra on Wade and Haslem. “They did it with their actions.”

Haslem easily had his best game of the year, as he recorded season-highs in scoring (18 points) and boards (13 rebounds) to go along with two steals on Sunday night. During the game, Haslem also quietly made franchise history for the Heat.

With his 10 points in the first half, Haslem passes current Pistons assistant coach Tim Hardaway for sixth on the Heat all-time scoring list

Not everything was great for Miami, however, as the team continues to deal with recurring injuries to their players. With Hassan Whiteside (hand) and Chris Andersen (calf) dealing with injuries in Miami’s frontcourt, the Heat took another blow. They used only seven players in the second half, Deng (left knee) and Michael Beasley (right elbow) got hurt in the opening two quarters.

Miami had two guys come off the bench to score in double figures, as James Ennis (16 points and six rebounds) and Mario Chalmers (11 points, four assists and a season-high nine rebounds) came up clutch for the Heat. Goran Dragic, who played 35 minutes of action, also put forth a solid effort en route to 10 points and five assists.

The Pistons, who had won five of their previous six games coming into tonight’s contest, were basically a two-man show against the Heat. Center Andre Drummond had 32 points (14 of 17 from the floor), 14 rebounds and two blocked shots, while point guard Reggie Jackson went off for 31 points (12 of 17 from the floor), nine assists and six rebounds.

Shooting guard Jodie Meeks, who was the only other player on Detroit’s roster to score in double figures, finished with 11 points and three assists.

Up next, the Heat will host the defending 2014 NBA Champions in the San Antonio Spurs (47-26) on Tuesday night at American Airlines Arena. The contest, which is scheduled to tip off shortly after 8:00 pm ET, will be broadcast nationally on TNT. This game will, of course, features the two teams who had been in the last two NBA Finals match-ups.
[xyz-ihs snippet=”Responsive-ImagenText”]