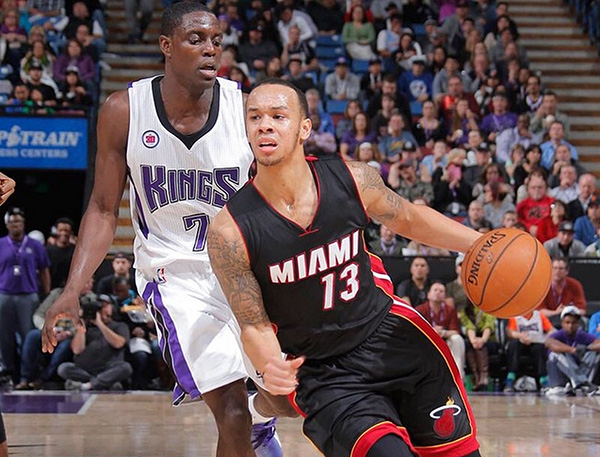 Chris Bosh scored 30 points and grabbed seven rebounds on 11-for-20 shooting while Luol Deng scored 25 points with six rebounds on 11-of-18 from the field in the victory. With the win over Sacramento, the Heat concluded their West Coast road trip with a 3-2 record.

The Heat coasted to a victory in Sacramento as Miami held the lead from the end of the first quarter until the very end of the game. The Kings struggled with turnovers and offensive execution as they shot under 43 percent with 15 total turnovers. DeMarcus Cousins had eight of those turnovers, as he scored 17 points on 4-of-12 shooting.

Miami played without Dwyane Wade and Chris Andersen. Wade missed his second straight game due to a hamstring injury, while Andersen was a game-time scratch due to an illness. The Heat moved to 5-5 on the season in games missed by Wade.

Both Shabazz Napier and Hassan Whiteside started for the second consecutive game for the Heat. Napier provided a steady presence on offense, getting to the free-throw line while setting up his teammates for baskets. He finished the game with 12 points, six rebounds, five assists and six free throw attempts. Whiteside was limited to 15 minutes due to foul trouble, but continued to be a presence on the defensive side of the ball, as he swatted two shots for the ninth consecutive game.

Miami led Sacramento by a score of 52-44 at the half. Despite struggling for much of the season in the third quarter, the Heat were able to hold onto their lead by outscoring the Kings 23-17 in the period. Deng was the star of the quarter for both teams, scoring 12 of his 25 points with an assortment of mid-range and long-range jump shots.

Erik Spoelstra commented on why Deng was so successful in getting good looks in the win over Sacramento:

“Because the ball was moving. We did run some actions for him, but he got himself the ball. Lane-cutting, getting involved in the pick-and-rolls and then secondary actions scoring the ball.”

Despite finishing the road trip 3-2—the Heat never finished above .500 on their annual West Coast road trip during the “Big Three” era—Spoelstra was cautious in overstating the importance of the record:

“I wouldn’t go so far as to say we found ourselves. I mean we finished 3-2. What we did is find out how to fight through adversity and really anchor in our defense on the road. If you look at our defense during this five-game stretch it was much better. And we’re taking a step forward. That’s the whole point of this trip, is to see if you can improve.”

Due to the absence of Andersen, Udonis Haslem made his first appearance since Sunday’s win against the Los Angeles Clippers. He played 24 minutes and scored seven points with six rebounds on 3-of-5 shooting. It was the most playing time Haslem has seen in a single game since he played 25 minutes in a loss to the Philadelphia 76ers on December 23.

The Heat will have four days off before playing their next game. Miami will travel back home to American Airlines Arena to play the Oklahoma City Thunder on Tuesday night. Tip-off is set for 7:30 pm EST and the game will be broadcast on Sun Sports.
[xyz-ihs snippet=”Responsive-ImagenText”]