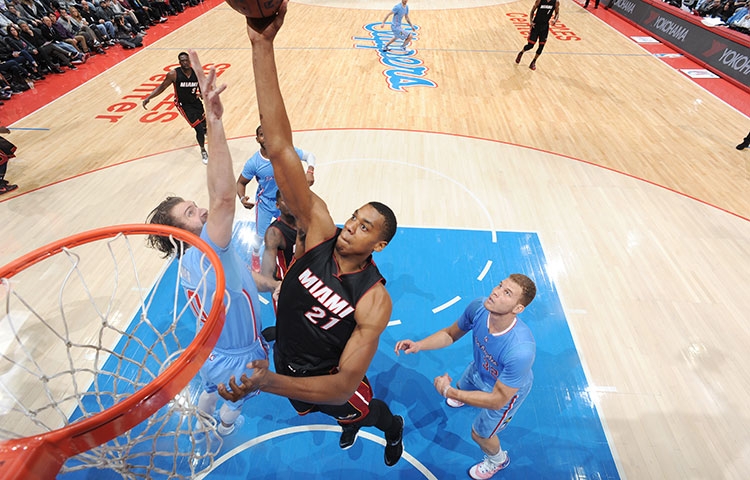 (Los Angeles, CA) – The Miami Heat (16-21) defeated the Los Angeles Clippers (25-13) at Staples Center on Sunday afternoon behind strong efforts from Dwyane Wade, Chris Bosh and Luol Deng, who combined for 61 of the team’s 104 points.

Bosh led the Heat with 34 points on 13-20 shooting while also pulling down seven rebounds.

Wade contributed 17 points and 10 assists to the victory, while forward Luol Deng chipped in with 10 points, three rebounds and four assists.

Although the Heat’s Big Three had one of their best efforts of the season, backup center Hassan Whiteside was the story of the game.

Whiteside had career-highs in points, rebounds and minutes played, and helped the Heat recover from a slow start against the Clippers.

“These are the most minutes (28) I got all season. Coach (Erik Spoelstra) really gave me an opportunity and I tried to make the most of it,” Whiteside told reporters following the game. “I just come out and play as hard as I can every time and give the coach what he needs.”

Indeed, Erik Spoelstra was looking for answers to his team’s sluggish start to the game: “Sometimes it’s just a matter of changing the karma of the game.”

“Karma,” thy name is Hassan Whiteside. Spolestra called Whiteside’s number midway through the first quarter after the Clippers raced out to an early 19-6 lead.

Whiteside quickly made his presence felt on both ends, scoring 12 points and grabbing six rebounds, and helped the Heat turn a 13-point deficit into a one-point lead heading into the second quarter.

Although the Clippers made several runs throughout the rest of the game, the Heat would not relinquish their advantage.

Spoelstra was pleased with Whiteside’s peformance and said he believes Whiteside’s game is evolving as he gains more experience.

“He had a terrific game. What you’re seeing is his confidence level rising and his teammates’ confidence in him rising,” Spoelstra said in his postgame comments to the media.

The Heat are now 1-1 on their five-game West Coast road trip (they lost to the Portland Trailblazers last Thursday night), and Spoelstra hopes his team can maintain the momentum from an unexpected victory.

“Now the challenge will be can we do it again and find consistency,” he told reporters.

And Whiteside intends to continue to take advantage of the opportunity Miami has given him.

“I always have a chip on my shoulder. The Heat gave me a chance and it’s only right I give 110% every time,” he told reporters following his career-best outing.

It was a rare Sunday afternoon start for the Clippers, who were playing less than 24 hours earlier after beating the Dallas Mavericks on the same floor Saturday night.

Whether they were fatigued or simply underestimated the Heat, the Clippers had no answers for the Heat, particularly for Bosh or Whiteside.

“They found a ‘pet play’ and stuck to it, and then we were having difficulty with it,” Clippers point guard Chris Paul said after the game.

The Heat will stay in Los Angeles through Tuesday, when they will play the Clippers’ co-tenants at Staples Center, the Los Angeles Lakers.

That game will tipoff at 10:30 PM EST and will be broadcast on Sun Sports.
[xyz-ihs snippet=”Responsive-Ad”]