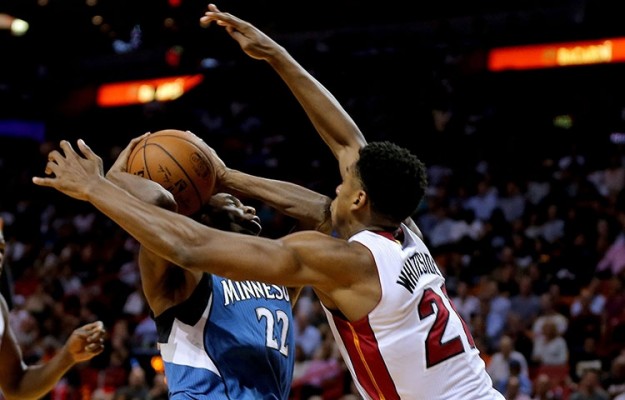 (Miami, FL) — Hassan Whiteside was in prime form tonight, but even a triple-double from the seven footer wasn’t enough to contain Andrew Wiggins and Zach Lavine in the fourth quarter, as the Minnesota Timberwolves pulled away late for 103-91 victory.

The Miami Heat looked to be in the driver’s seat after a strong first half led by Whiteside’s post play and Goran Dragic‘s 12 points and seven assists. The veteran guard assisted or scored on the team’s first 13 points and had the offense running like a well-oiled machine.

Assistant coach Chris Quinn commented on the impressive starts by both Dragic and Whiteside.

“Yeah, they were huge for us,” Quinn said at halftime. “Those guys have been working really hard and they’re seeing the benefits of it.”

While Dragic struggled to sustain his game in the second half, Whiteside continued to shine. The big man finished with 24 points and 14 rebounds. Entering the game, Whiteside was leading the NBA with 4.0 BPG. Tonight, he had five in the first half and 10 in total. The 10 blocks are the most by any player in a single game this season.

The problem for Miami came down to a lack of offensive production. Chris Bosh and Dwayne Wade were held to 10 points each and Miami’s bench was outscored 54-13 by Minnesota’s second unit. It was a rare off-night for Bosh, while Wade has been struggling to score as of late. He is averaging only 10.8 PPG over the last four games after his hot start to the season.

“It was right there,” Spoelstra told the press, “70 to 70, and then I think we had three straight turnovers, offensive fouls and they [Minnesota] just finished the game from there, but it was very competitive. I actually liked the way our guys competed.”

“It looked like it was shaping up to be a game just to grind it out and find a way to win but they just made more plays at the end.”

A clear turning point for Minnesota was when they began implementing their “Hack-A-Whiteside” strategy in the fourth quarter. Whiteside was two-for-nine at the line on the night. He was pulled late after becoming a liability. Until that point, the battle of the young bigs between Whiteside and Karl Anthony-Towns was a treat for NBA fans. The number one pick out of the University of Kentucky finished with 14 points and 14 rebounds.

Wiggins led all scorers with 24 points and the T-Wolves also received a boost from their star point guard, Ricky Rubio. He returned after having not played since Nov. 9th.

Miami’s Gerald Green returned as well as he missed the previous six games for Miami and the rust was evident. He finished with only two points.

Miami is now 6-4 on the season as Minnesota moves to 5-6, sporting an impressive 5-1 road record. The Heat are in the midst of a seven-game homestand and will look to bounce back against the Sacramento Kings on Thursday. The Timberwolves will get the Magic in Orlando tomorrow night.
[xyz-ihs snippet=”Responsive-Ad”]