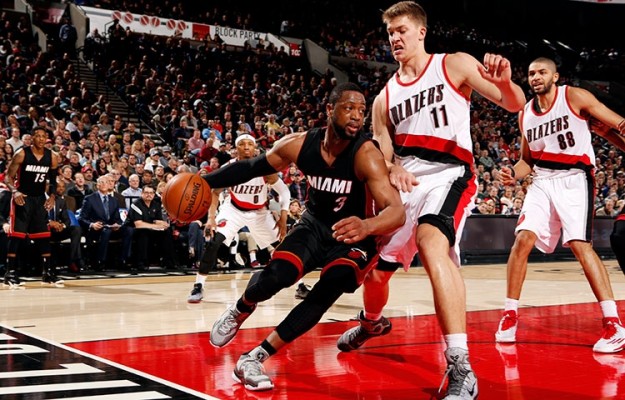 (Miami, FL) — The Miami Heat (30-36) will try to make it two wins in a row tonight when they take on the Northwest Division-leading Portland Trail Blazers (44-21) at American Airlines Arena.

The Heat are back in the playoff picture for the moment thanks to stronger play at home of late. Since losing to the Atlanta Hawks on February 28, Miami has gone 5-1 on their home court, including a win over the Cleveland Cavaliers on Monday.

Though the victory was undoubtedly satisfying for Heat players and fans, Dwyane Wade–who put on a turn-back-the-clock performance with 32 points, two rebounds, two assists and five steals–put the result in perspective following the game: “As a team we needed this win no matter who it was.”

Coach Erik Spoelstra told reporters after Tuesday’s practice that he has cautioned his team against letting down following Monday’s win: “The most important thing after last night was (their) approach coming in today. It has to be an approach that’s professional, that still has an urgency to keep on moving forward as a group and taking care of our business at home.”

The Heat’s success at home in March is due in no small part to the play of point guard Goran Dragic, who has come on strong recently after a somewhat slow start with the Heat after he was acquired by the team at the trade deadline.

Dragic is averaging 19.0 points, 5.0 assists and 3.6 rebounds this month. He has also been more accurate from the floor–his field goal percentage is .543–than at any other time this season.

Speaking to the media on Tuesday, Dragic sounded optimistic that the team, which has sustained numerous injuries to significant contributors this season, will continue to jell down the stretch as they make a push for the playoffs: “If we are focused enough and everybody is on the same page, then it’s much easier. Hopefully we’re going to continue to develop that chemistry and hopefully we’re going to make a run those last sixteen games.”

The Trail Blazers have also been hit by the injury bug recently. Shooting guard Wesley Matthews has been lost for the season with a ruptured left Achilles tendon suffered in the team’s win against the Dallas Mavericks at home earlier this month. Matthews was averaging career-highs in nearly all significant statistical categories, including points (15.9), rebounds (3.7), assists (2.3), and field goal percentage (.448).

Though the Trail Blazers traded for guard Arron Afflalo last month, he was expected to bolster the team’s bench as Matthews’ backup. Since Matthews went down, Afflalo has been inserted into the starting lineup and has averaged 13.4 points per game on .385 shooting from the field. Portland has gone 3-2 in those games.

LaMarcus Aldridge, the Trail Blazers’ All-Star power forward, has been playing through thumb injuries most of this calendar year. Most seriously, he tore a ligament in his left thumb while playing the Sacramento Kings on the road in late January.

He initially opted to have the thumb surgically repaired, but later changed his mind and decided to play with a splint on his hand instead. Though his scoring has dipped slightly since hurting his thumb, Aldridge is still leading the team in points (23.3) and rebounds (10.5).

The Trail Blazers have gone 13-10 in the 23 games since Aldridge’s injury.

Tonight’s game will be the second and final matchup between the two teams this season. The Heat are looking for a split with the Trail Blazers, having lost in Portland, 99 – 83, on January 8th.

Miami Heat fans, if not the players and coaches themselves, may be scoreboard-watching during the game, since three other teams jockeying for the final two playoff spots in the East are also in action tonight.

Sun Sports will broadcast the game tonight, which tips off at 7:30 PM EST.
[xyz-ihs snippet=”Responsive-ImagenText”]