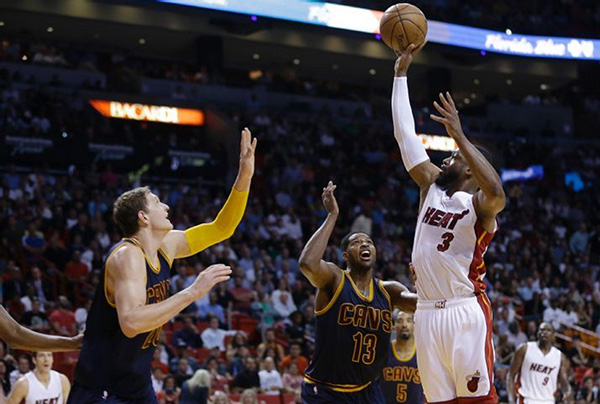 (Miami, FL) — With their playoff lives seemingly backed against the wall, the Miami Heat (30-36) leapfrogged their way back into the Eastern Conference’s eighth seed on Monday night after a dominating 106-92 victory over the Cleveland Cavaliers (43-26) at American Airlines Arena.

The game was a blast from the past for Dwyane Wade, who led all scorers with 32 points (13 of 18 from the field) to go along with five assists. In his last five contests, Wade has scored at least 25 points and is averaging 29.4 points and 4.2 assists per game in that span.

“We’ve known that if we play the way that we played tonight on both ends of the floor, we know that we can beat anybody that we play against,” said Wade after the game. “It’s just about getting to that game consistency. We haven’t been able to do that as much as we wanted to today, but it was a good home win. My teammates did a hell of a job today of coming out offensively, as everybody was unselfish getting the ball out of our hands, defensively being up for each other and we got a good home win.”

An outstanding play of Wade’s came at about the halfway through the third quarter, as he set up Goran Dragic for an assist. However, this was no ordinary pass as he effortlessly flicked the ball behind his back to Dragic, which left LeBron James and shooting guard J.R. Smith baffled by what just happened.

“It was good to see him playing with a bounce in his step, for sure,” James complimented his close friend and former teammate.

Unfortunately, a great recovery play by Smith resulted in him blocking Dragic’s layup attempt from behind. The pass was one of the better ones seen all season in the NBA, and it’s too bad that the play wasn’t completed to give Wade the assist.

Dragic was a star in the backcourt with Wade as well, as the point guard racked up 20 points, nine assists, five rebounds and two steals on Monday night in Miami. Hassan Whiteside, who continues to dominate his way to the top among centers in the NBA, added yet another double-double to his resume with 16 points, 11 rebounds and three blocked shots.

Coming off the bench, Mario Chalmers really kept Miami’s momentum going to combat a weaker Cavs bench that was already shuffled around from power forward Kevin Love’s absence. Chalmers was a spark, as his 16 points off the bench helped Miami lead Cleveland by as many as 25 points in the third quarter.

This is likely a game that James will want to move on from, considering that late in the fourth quarter he had not yet recorded a single rebound or steal. However, “King James” led his team in scoring with 26 points and tacked on four assists and only two rebounds.

“Like everyone else, I’m sure he’s a little bit tired,” said Cleveland Cavaliers head coach David Blatt on his superstar forward. “He played through an injury tonight.”

Kyrie Irving, who had scored 57 then 33 points respectively in his last two games, was mostly held in check tonight as he had 21 points (only made five of 15 shots) and six assists. Cavs center Timofey Mozgov, the only other player besides James and Irving to score in double figures, finished the game with 10 points and five rebounds.

Up next on their slate, the Heat will host the Portland Trailblazers (44-21) at American Airlines Arena. Wednesday night’s contest is scheduled to tip off shortly after 7:30 pm ET.
[xyz-ihs snippet=”Responsive-ImagenText”]