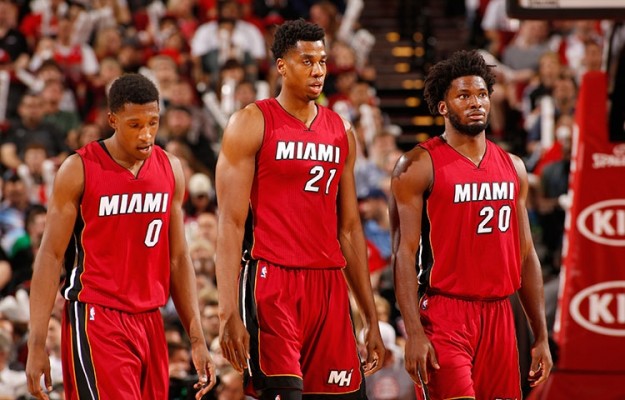 (Portland, OR) — As the Miami Heat were thoroughly handled in a 110-93 drubbing by the Portland Trail Blazers on Saturday night, a certain silver lining remained despite the loss.

That’s because on Saturday night, the Chicago Bulls fell to the Detroit Pistons, allowing Miami to notch its 19th playoff berth in the franchise’s 28 seasons.

“It’s something, when you step back, we don’t want to take it for granted, getting in there, just how tough it is in this league,” coach Erik Spoelstra said. “So that is the perspective on that with this organization. We always have big expectations. That doesn’t change from year to year.

With the team’s playoff berth, Miami’s 2016 first-round NBA draft pick now goes to the Philadelphia 76ers because the selection had been protected through the first 10 choices.

“To be honest with you, we believed the whole time we would be in the playoffs, so it’s good to clinch it, but it’s not a surprise,” said forward Luol Deng, who had 14 points, 13 rebounds, two assists, and three steals on the evening. “I think right now, instead of just looking at the standings and where we’re going to end up at the end of the year, we’re really got to focus on us and try to figure it out right now: How can we go into the postseason being at our best? We’ve got some really good games coming up, some important games.”

A critical 13-0 Blazers run blew the game open in just the second quarter as the home team built a 33-25 lead, and then extended that lead to 59-42 by halftime.

Spearheading that attack was 24-year-old phenom C.J. McCollum, who torched the Heat for 24 points on 9-15 shooting. The shooting guard was also a perfect 6-of-6 from three.

We’re disappointed with the way we played,” Deng said. “Sometimes you lose a game, but you’re still satisfied with how hard you played. I thought tonight they played harder than us.”

After being the third seed in the Eastern Conference just a night ago, the Heat now drop to the sixth seed with tonight’s loss.

“We did not bring a great game that would have been necessary to get this one on the road,” Spoelstra said.

The Heat get another crack at it on Tuesday night when they face off against the Detroit Pistons at home.
[xyz-ihs snippet=”Responsive-Ad”]