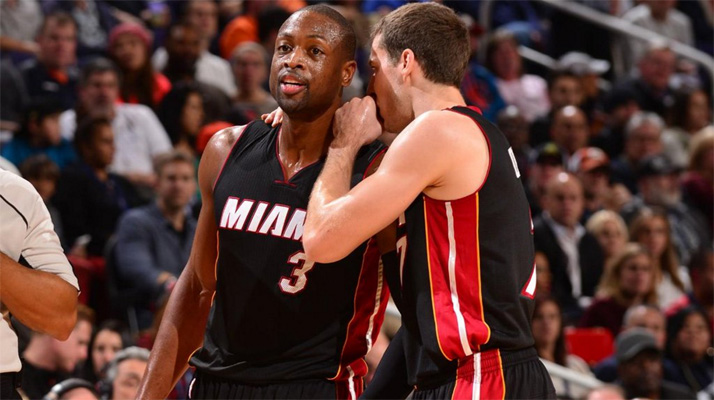 (Phoenix, AZ) – Following a disappointing 98-90 home loss on Wednesday night to the New York Knicks, the Miami Heat (22-14) bounced back against the struggling Phoenix Suns (13-26) with a 103-95 road victory on Friday night at Talking Stick Resort Arena.

It was quite the homecoming party for ex-Suns players Goran Dragic (8-of-15 from the floor and seven assists) and Gerald Green (7-of-11 from the field, four rebounds and three assists), who scored 22 and 21 points respectively to help propel the Heat to victory.

“Me and Gerald have great chemistry from the past few years,” said Dragic after the game. “I’m just glad we’re here together.”

Dragic, whose 22 points tied a season high, was also an efficient 3-of-5 from behind the arc on the night.

11-time NBA All-Star shooting guard Dwyane Wade (9-of-14 from the floor and 9-of-10 from the charity stripe) led all scorers with 27 points.

“He’s one of the best closers in this league,” said Dragic on his teammate Wade. “We always feel comfortable with him in the final few minutes.”

However, despite their 53-40 halftime lead, the game was far from over for Wade and company as the Suns mounted a comeback to take the lead in the second half.

The Suns, who recently lost star guard Eric Bledsoe to a season-ending knee injury, had every reason to come out and beat the Heat in front of their home crowd. However, Phoenix couldn’t pull off the task at hand and lost their 11th straight contest to Miami.

Point guard Brandon Knight (11-of-24 from the field, four assists and four rebounds) was the leading scorer for the Suns with 26 points, while rookie shooting guard Devin Booker had 16 points and six rebounds.

Up next, the Heat will remain on the road and take on the Utah Jazz (15-20) on Saturday night. The contest, which is scheduled to tip off shortly after 9:00 pm ET, will be broadcast live locally on Fox Sports Sun.
[xyz-ihs snippet=”Responsive-Ad”]