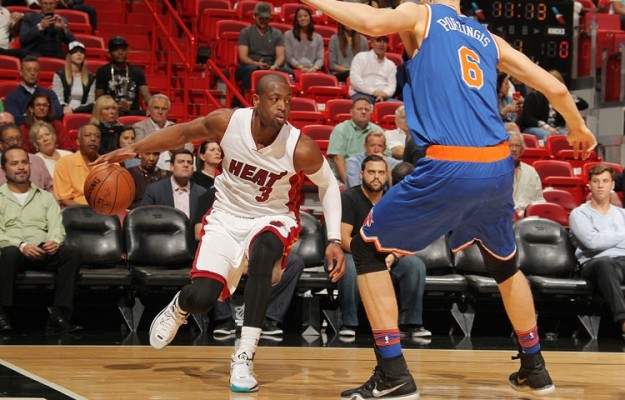 Despite playing in the second game of a back-to-back, New York set the pace early on. They ended the first half up eight on a 15-to-4 run and never slowed down from there.

The Miami Heat were in position to notch their eighth victory while overcoming a double-digit deficit this season but ran out of gas in the second half. Instead, the Knicks notched their first victory in nine contests against the Heat, beating their East Coast rivals 98 to 90.

The Knicks have now surpassed their win total from last season with 18, though they still remain a game below .500. Miami drops to 21-14 with the loss Wednesday night.

“A lot of these games, were just grinding it out. We’re still trying to find our identity and how we want to play, trying to find some consistency throughout this season. These past three games, man, we showed something as a team, as a unit, but it wasn’t just me, it was a total team effort in this three-game win streak and we want to build off this momentum.”

Dwyane Wade went for 18 points, six rebounds and six assists while Chris Bosh scored 28; his ninth 20+ point outing in 10 games. The Heat also got a boost from Tyler Johnson, who played with outstanding hustle in his second game back from a shoulder injury that caused him to sit for five games back in December. None of that was enough, however, as New York’s improved defense held the Heat in check.

Heat head coach Erik Spoesltra spoke to the media about the team’s disappointing effort after the game:

“Geez, that was uncomfortable,” he said with a sore smirk to open the press conference. “It felt and looked like we were playing in the mud and we just couldn’t generate the necessary energy that we’re accustomed to having and they just carved us up.”

“… It was a tough night for us offensively.”

A “tough night offensively” may be a bit of an understatement as the Heat shot a dismal 2-for-17 from three-point range. In addition, Miami’s bench was outscored 24-16.

Wade added his thoughts on the team’s offensive struggles:

“It just wasn’t fluid,” he told the media after the game.

Hassan Whiteside was largely a non-factor in this one, feeling the effects of a sore knee that kept him out of Monday night’s overtime win against Indiana.

After the game, Whiteside admitted the knee was bothering him, but he was determined to tough it out.

“I still went out there and rebounded and did what I did,” he told reporters.

He did complete a powerful dunk over Knicks big man, Kristaps Porzingis, and followed that up with a vicious staredown. Whiteside got slapped in the face by Porzingis on the play. He said he couldn’t feel his face after that:

Up next, the Knicks travel to San Antonio to play the Spurs, who haven’t lost at home this season. As for Miami, they play 14 of their next 16 games on the road and look to prove their grit away from the comfort of their own home floor. Wade spoke about the daunting challenge after Wednesday’s loss:

“I’m very confident this team can go out on the road and win games.” He added, ” I don’t think I’ve had a challenge like this January during my career. We’ll see what we’re made of.”

This Heat team will need some consistency to go along with that confidence if they hope to remain a contender in the increasingly tight Eastern Conference.
[xyz-ihs snippet=”Responsive-Ad”]