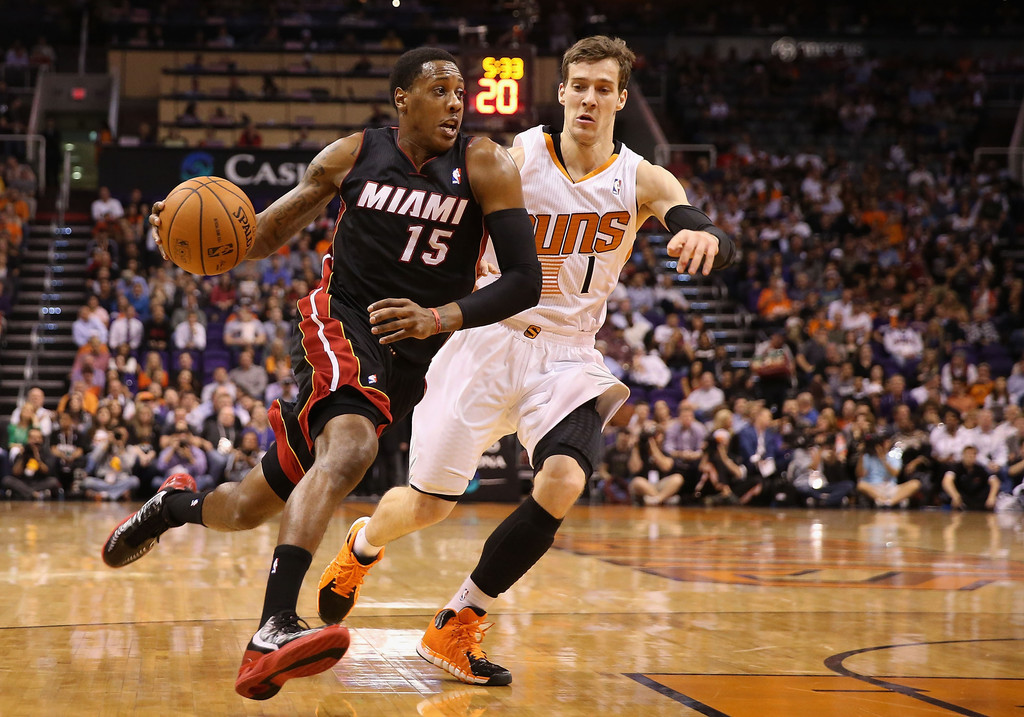 (Phoenix, AZ) — Tuesday night marks the halfway point of the (9-11) Miami Heat’s daunting five-game road trip across the US. This time, the Heat face the (12-9) Phoenix Suns as they desperately try to regain their mojo following a four-game losing streak. Miami has swept their last eight games against the Suns, six of which were road victories. Unfortunately, for this meeting, the Heat enter at their absolute worst; for the first time in 27 years of the franchise’s history, Miami has allowed four consecutive opponents to shoot 54% or higher, with a combined total 55.9 percent from the field.

In a Sunday’s postgame interview, center Chris Bosh expressed his frustration with the team’s performance:

“Truth be told, we are giving up 59 percent, 55 percent plus every game from the field and even if we do take the lead, or even if it is a close game, you’re probably gonna lose more games than you’re gonna win if you give up 55 percent plus shooting…and this is (on) a constant basis with this team and we have to bring that number down a lot if we expect to win.”

And expecting to win has been no easy feat for Heat fans these days. With injuries taking out a different player each week and a virus sweeping the locker room, victories have been scarce. In Sunday night’s embarrassing defeat, the Heat let the Memphis Grizzlies shoot 59% from the field with five players scoring in double digits. Jon Leuer led his team, putting up 20 points and 12 rebounds. Courtney Lee and Mike Conley added 17 and 18 points respectively, with the latter shooting a perfect 8-of-8 from the field.

Although the Heat couldn’t keep up with the red-hot Grizzlies, Dwyane Wade seemed to play the game relatively injury-free, as he scored 25 points to go along six assists. Josh McRoberts contributed 14 points and five assists, while Bosh added a measly 12 points. Bosh once again blamed poor defense for the team’s struggles:

“It’s not shocking, it’s disappointing,” he said. “We’ve just had speeches, we’ve had demonstrations, we’ve had walk-throughs, we’ve had practices, and still nothing happens. They shot 59 percent for the game? We can’t even get it down to a flat 50. It’s like everyone’s been shooting 59 percent…it’s just open season on us, man. Until we can take more pride in [ourselves] as a unit it’s just not going to happen. We’ve got to individually guard the ball with passion, and everything else will follow.”

Wade is determined to use the road as a method of singling out inefficiencies and attacking the source of their problems:

Tuesday might shape up to be the perfect moment for the Heat to turn things around defensively. The Suns have won just two of their last five games, only one more than Miami. They are also coming off of back-to-back losses against the Los Angeles Clippers and Houston Rockets. Both the Heat and Suns will sit out players due to ankle injuries: Chris Andersen again for a sprain, and guard Isaiah Thomas for bruising.

Heat coach Erik Spoelstra remains hopeful for a comeback against the Suns on Tuesday.

“We’ll get our breakthrough at some point, at those moments of truth. We’re banging on the door for it. We just haven’t been able to respond and get over the top, and respond in that fashion.”