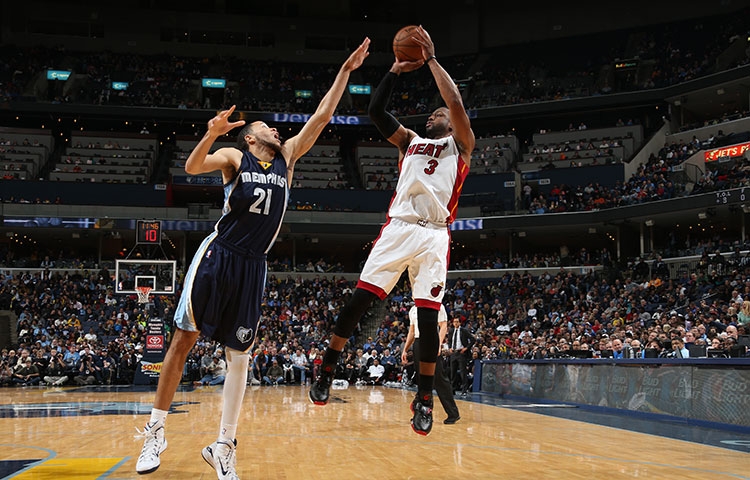 Behind another lackluster defensive effort, the Heat allowed the Grizzlies to shoot 59 percent from the field. Memphis had five players score in double digits, led by Jon Leuer’s 20 points off of the bench. Leuer also grabbed 12 rebounds for his first double-double of the season.

Mike Conley shot a perfect 8-of-8 from the field en route to 18 points, while Courtney Lee notched 17 points on 7-0f-9 shooting.

This was the fourth straight game in which the Heat allowed an opposing team to shoot at least 54 percent from the field, a first in the 27 seasons since the franchise began play in 1988.

Miami was led by Dwyane Wade’s 25 points and six assists. But outside of Wade, the Heat didn’t have much scoring punch as Chris Bosh contributed just 12 points, while Josh McRoberts had 14 points on 6-of-8 shooting with five assists.

While the Heat trailed just 55-48 at halftime and kept it close up until the end of the third quarter, the Grizzlies dominated most of the contest. Miami never led during the second half, and despite going on an 8-2 run that cut Memphis’s lead to 82-79 with 10:02 remaining in the fourth quarter, the Grizzlies would end up going on an 8-0 scoring run that put the game away midway through the fourth quarter.

Miami allowed Memphis to shoot 62 percent from beyond the arc as the Grizzlies nailed 8-of-13 three-point attempts. Lee was 3-of-3 on treys, while Conley and Leuer converted on two three-point field goals each.

About the only positive derived from the Heat’s defensive effort was the fact that they limited center Marc Gasol to a season-low two points on 1-of-6 shooting. Gasol entered Sunday’s game averaging 19 points per game and is considered to be one of the front runners for this year’s MVP award.

Luol Deng made his return to the starting lineup after missing a game due to a bruised right hand. The small forward contributed 13 points and five rebounds on 12 field goal attempts. Norris Cole also made his return to the lineup after missing Friday’s loss to the Milwaukee Bucks due to a cold. Cole had just four points on 2-of-6 shooting with four assists.

McRoberts looked a lot more aggressive in Sunday’s loss to the Grizzlies in comparison to his effort during Friday’s loss to the Bucks. Wade acknowledged his teammate’s improvement following the game:

“He touched the ball a lot. We love a guy who can make the play the way he can. He started out early by being aggressive. He’s just getting his legs under him. He missed the whole training camp and the whole preseason. He’s continuing to get a feel of everything.”

While Miami was better on the glass after grabbing a franchise-low 20 rebounds versus the Bucks on Friday night, the Heat still had just 30 total rebounds as a team. They entered the contest with an NBA-low 35.5 boards per game.

Bosh continued to cite the team’s lack of quality defense as the reason Miami lost their fourth straight game on Sunday night:

“You’re probably going to lose more games than you win if you’re giving up 55 percent-plus shooting and this is a constant basis with this team. We have to bring that number down a lot if we expect to win.”

On the topic of whether or not the Heat’s lackluster defense is shocking, Bosh clearly stated that it’s not:

“It’s not shocking. It’s disappointing…If we’re not getting stops. We’re not winning the ball game.”

Danny Granger was a healthy scratch just two nights after starting at small forward versus the Bucks. Justin Hamilton, who played 20 minutes in the loss versus the Bucks on Friday, did not make an appearance until 1:13 remained in Sunday’s loss to the Grizzlies.

Udonis Haslem led the team with eight rebounds, but went scoreless in 18 minutes of playing time.

The Heat will continue their road trip by visiting Arizona to play the Phoenix Suns at the US Airways Center at 9:00 pm EST on Tuesday night. The game will be broadcast on Sun Sports.
[xyz-ihs snippet=”Responsive-Ad”]