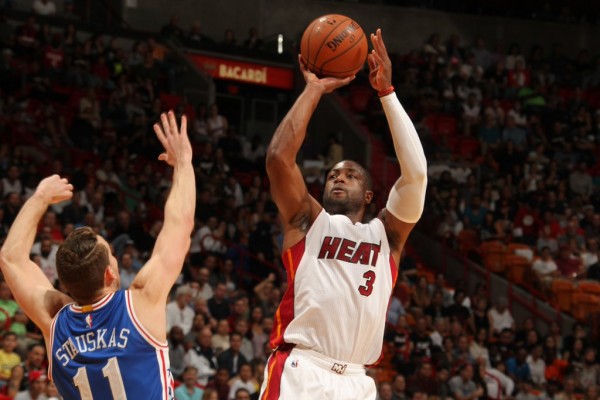 (Miami, FL) – After their 116-109 victory over the Sacramento Kings on Thursday night, the Miami Heat (8-4) kept the lowly Philadelphia 76ers (0-14) out of the win column on Saturday with a 96-91 victory at American Airlines Arena.

It was far from easy, however, as Miami had to rally from two separate 17-point deficits in the game as well as an 11-point deficit midway through the fourth quarter to capture the win.

“Guys didn’t like the way the game was going,” said Heat coach Erik Spoelstra after his team’s come-from-behind victory. “There was tension, and I like that.”

Dwyane Wade, who scored 24 points in his last game against the Kings, led all scorers with 27 points (8-of-17 from the floor and 11-of-13 from the charity stripe) to go along with seven rebounds, four assists and three steals.

“The tough part about it for some of us that’ve been here, we’ve been to the mountaintop,” said Wade. “We used to have a veteran team that knew how to come out and take care of business in games like this, but it’s a whole new team. It’s very unfortunate for us tonight that we had to spend a lot of energy, but this team’s gotta go through something.”

Wade had his highest scoring output of the season and made NBA history in the process. After he tallied 19,000 career points and passed small forward Dale Ellis for 50th on the NBA’s all-time scoring list, the 11-time NBA All-Star and three-time champion also passed shooting guard Reggie Theus for 49th on that list with 19,017 points.

Down the stretch in the fourth quarter, the defense made sure there would be no upset victory for the 76ers in front of the Miami faithful as Philadelphia was held to only 17 points in the final 12 minutes.

With yet another loss, the young 76ers could not find a way to shut the door on the Heat in the fourth quarter. Philadelphia point guard Isaiah Canaan (8-of-17 from the field) and small forward Robert Covington (6-of-11 from the field) came off the bench to score 22 and 21 points respectively.

76ers rookie center Jahlil Okafor, who was teammates last season with Heat rookie Justise Winslow (11 points and five rebounds) at Duke University during their championship run, had 16 points to go along with 11 boards and three blocks.

“The culture here is very unique,” said Winslow on his rookie season in Miami. “And I want to stay here for a very long long long time.”

Up next, the Heat will conclude their seven-game homestand on Monday night against the New York Knicks (8-6) at American Airlines Arena. The matchup, which is scheduled to tip off shortly after 7:30 pm ET, will be broadcast nationally on NBATV and live locally on Fox Sports Sun.
[xyz-ihs snippet=”Responsive-Ad”]