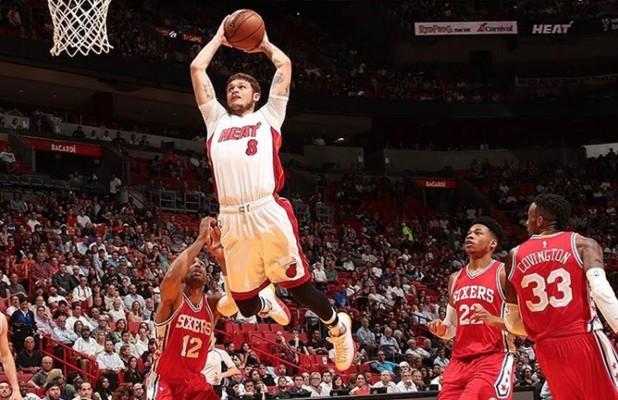 (Miami, FL) – Following a disappointing road loss to the Dallas Mavericks on Monday night, the Miami Heat (28-33) returned home and never trailed against the Philadelphia 76ers (22-38) en route to a 125-98 beatdown at American Airlines Arena on Wednesday night.

Heat shooting guard Tyler Johnson, who signed a four-year, $50 million contract over the offseason, put together a dominant effort off the bench to lead all scorers with 24 points (8-of-12 from the field, 2-of-3 from behind the arc and 6-of-8 from the charity stripe), four assists and two steals in just 28 minutes of action.

“I think it’s just trust and understanding that we’ve come a long way,” Johnson said immediately after the victory. “This team is really coming together. Obviously we’ve got a tough stretch coming up, but it’s good to be playing well going into that stretch.”

The Heat bench was magnificent as a unit, as Miami outscored Philadelphia in bench scoring by a 67-47 margin, backed up by shooting guard Wayne Ellington‘s 18 points (6-of-9 from three-point range) and forward James Johnson‘s 14 points and four rebounds.

“We were really locked in tonight. We had a bad taste in our mouth with the Dallas game and we realized that we could’ve been better in a lot of areas,” Ellington said. “We dropped that one, so we wanted to come in tonight and make sure we gave our entire effort and energy on the defensive end of the floor. We knew that after this game, we didn’t want to have that same taste.”

Despite a dismal 11-30 start to their season, the Heat continue their miraculous turnaround and have now won 17 of their last 20 contests due to their three-point sharpshooting, tenacious defense and versatile roster.

“We wanted to just get more consistent to our identity and what’s been successful for us. That Dallas game was not a full 48 minutes.” Heat head coach Erik Spoelstra said in his postgame press conference following the victory. “We wanted to get back to all of it. The defensive intensity, playing and competing for a full 48 minutes, and you saw the guys share the game offensively.”

For the Heat starters, guards Goran Dragic and Dion Waiters each had 15 points, while star center Hassan Whiteside added yet another double-double to his resume with 15 points, 11 rebounds, four blocked shots and three assists.

In a losing effort for the 76ers, small forward Robert Covington led his team in scoring with 19 points and five boards in 26 minutes. Richaun Holmes had 15 points off the bench, while point guard T.J. McConnell finished with 14 points, five assists and five boards.

Up next, the Heat will hit the road to take on a Southeast Division rival in the Orlando Magic (22-39). The contest, which is scheduled to tip off shortly after 7:00 p.m. ET, will be broadcast live locally on Fox Sports Sun.
[xyz-ihs snippet=”Responsive-ImagenText”]