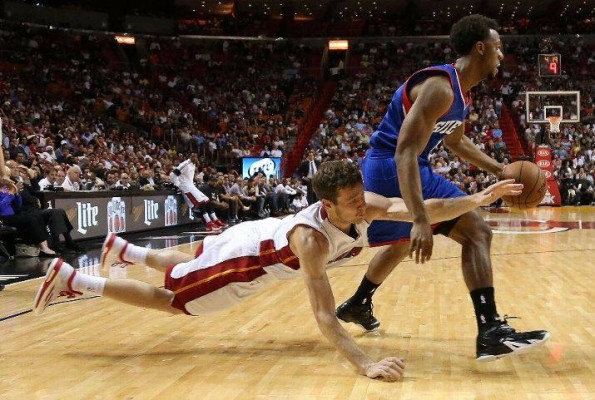 In a scramble for the seventh and eighth seeds in the Eastern Conference, the Heat helped their cause as they moved a full game ahead of the Brooklyn Nets for the seventh seed.

“It’s great for us,” said Dwyane Wade on his new teammate. “It’s giving us a new dynamic.”

In his second game with Miami, Dragic put forth a double-double with 23 points (nine of 14 shots made from the field) to go along with 10 assists and two steals on the night.

Luol Deng, who had a rough night in Saturday night’s 105-91 loss to the New Orleans Pelicans, shot lights out against Philadelphia en route to 29 points (11 of 14 from the field) and four three pointers made.

According to Fox Sports Florida, the Heat are 8-0 this year when Deng scores at least 20 points.

“I’ve always said I know my game now, I don’t try to do too much with the ball,” said Deng after the win. “As long as the ball moves, we’re a better team and I stick to what I can do. We are at our best when the ball is moving.”

The 76ers played the Heat very tough during a highly entertaining first half, in which Miami took a 61-60 lead heading into the locker room.

Philadelphia scored the first seven points of the third quarter to take a 67-61 lead after shooting guard Robert Covington, who had 16 points and three treys made on the night, buried a 25-foot three pointer.

However, the Heat responded with a few scoring runs of their own in the third to put them ahead for good, which included a 9-0 run and later a 16-4 run to take a 91-79 lead into the final 12 minutes of play.

In the team’s victory that saw the Heat lead by as many as 21 points in the fourth quarter, Wade scored 18 points to go along with four assists in only 23 minutes on the court. Hassan Whiteside continued his stellar play, as he racked up another double-double with 12 points and 14 rebounds.

After having not played in a game since the 2011-2012 season, newly signed shooting guard Henry Walker shot the basketball like a veteran who hadn’t missed a step. The 27-year-old, who was a second round draft pick in 2008 from Kansas State, scored 11 points on four of five shots. Moments after entering the game, Walker brought the Miami faithful to their feet during the first quarter when he drove to the hoop for a powerful one-handed slam dunk.

76ers rookie center Nerlens Noel, a sixth overall draft pick in 2013 out of Kentucky, showed his value in an 18-point effort that included seven rebounds and four blocked shots. Shooting guard Hollis Thompson was on fire from the field for Philadelphia, as he scored 22 points on six of nine shots from behind the arc.

Up next, the Heat will travel upstate to visit the Orlando Magic on Wednesday night, who have won three straight games during their homestand. The contest is scheduled to tip off shortly after 7:00 pm ET at Amway Center.