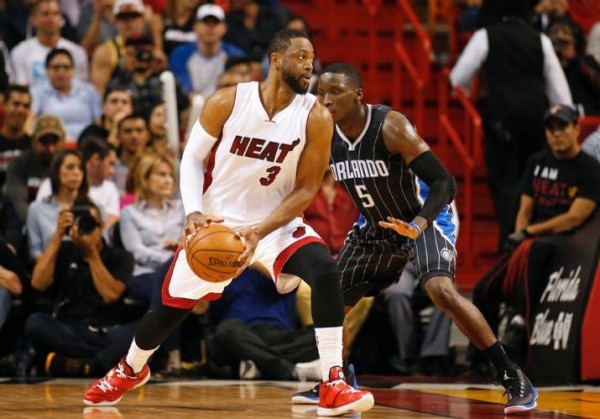 (Miami, FL) — In their final regular season home game of the season at American Airlines Arena, the Miami Heat (36-45) fended off elimination from the Eastern Conference playoff race as they beat the Orlando Magic (25-56) by a score of 100-93 on Monday night.

The Heat gave their home crowd something to smile about on fan appreciation night, as Dwyane Wade (22 points, five assists, four rebounds and two blocks) thanked the Miami faithful at center court for their support throughout the 2014-2015 season.

“We’ve got a great fan base,” said Wade after the game. “It’s easy for them to be here in the good times, but through the tribulations they’ve been through it all to support us. We just appreciate them so much.”

Hassan Whiteside was huge for Miami on the night, as the big man tied a career high with 24 points to go along with his 13 rebounds and five blocked shots. From the free throw line, Whiteside (four of five shots made from the charity stripe) was significantly better than his dreadful four-of-16 performance during Saturday night’s 107-104 loss to the Toronto Raptors.

Luol Deng had a double-double with 14 points, 10 rebounds and four assists on the evening, and drained a clutch trey with 32 seconds left in the game. The three pointer was a nail in the coffin for the Magic after they cut Miami’s lead down to six points, considering Orlando trailed by as many as 22 points in the contest.

“The biggest thing for me has been consistency. There’s been times we’ve moved the ball & I’ve been able to do what I do,” said Deng. “I don’t really like to be staying still. It’s not my strength. I could shoot a high percentage but I’m not per se a shooter.”

Goran Dragic, who came very close to a triple-double, finished the game with 13 points, eight assists and seven boards for the Heat on Monday night.

“So, you’re saying there’s a chance?” said Heat head coach Erik Spoelstra while making a reference to the movie Dumb & Dumber. “I don’t know what the percentage is now, but at least it’s gone up a couple ticks.”

Orlando had a two-headed monster on Monday night in shooting guard Victor Oladipo (30 points on 10 of 23 shots from the field) and small forward Tobias Harris, who had a double-double effort with 26 points and 12 rebounds. Rookie point guard Elfrid Payton compiled 10 points and seven assists, as he was the only other Orlando player to score in double figures besides Oladipo and Harris.

For the Heat, they still need help in three other games involving the Indiana Pacers (37-43) and Brooklyn Nets (37-44) to make the playoffs for the seventh straight year under coach Spoelstra. Miami received a helping hand from the Chicago Bulls on Monday night, as they routed the Nets 113-86 at Barclays Center.

For their final game of the 2014-2015 regular season, the Heat will travel to play the Philadelphia 76ers (18-63) at Wells Fargo Center. The contest is scheduled to tip off shortly after 8:00 pm ET on Wednesday night.
[xyz-ihs snippet=”Responsive-Ad”]