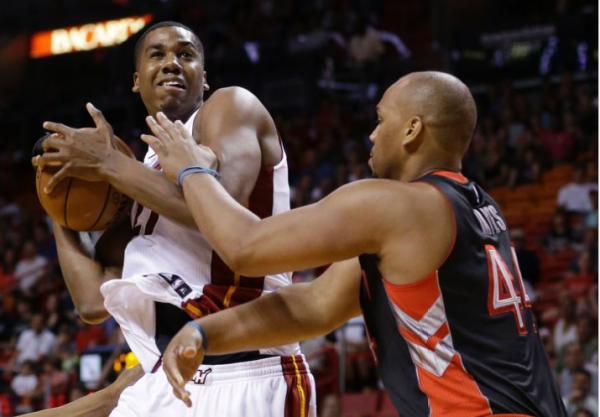 (Miami, FL) — In an injury-riddled season of ups and downs, the Miami Heat (35-45) most likely ended any chance they had of a playoff berth after a 107-104 defeat at the hands of the Toronto Raptors (48-32) on Saturday night at American Airlines Arena.

“I’ve got to get the team playing its best basketball at this time of year,” said Heat head coach Erik Spoelstra after the loss. “That’s my job to figure it out, and we had our opportunities.”

The contest was very close throughout and was tied 58-58 at the half, but the Raptors made plenty of clutch shots down the stretch. The game was decided in terms of team free-throw efficiency, as Toronto shot 28 of 37 (75.7 percent) from the charity stripe, while Miami shot an abysmal 24 of 44 (54.5 percent) at the free throw line.

Dwyane Wade, who led both teams in scoring with 30 points, six rebounds and five assists, was very appreciative of his teammates through this rough season.

“We had opportunities, they made big shots,” said Wade. “I’m proud of each guy, no matter what the outcome is. We have nothing to be ashamed of. Every guy came in and did what you expect them to do. They battled.”

The Raptors were led by shooting guard Lou Williams, who came off the bench to score a team-high 29 points (nine of 18 from the field and four of seven from behind the arc) and made all seven of his free throw attempts. With Toronto leading Miami 99-97 with 31 seconds remaining in the fourth quarter, Williams drained a three pointer that was a dagger to the Heat’s chance of victory.

“This one especially feels good to clinch home court, it’s my first time having home court in my 10-year career, so I’m looking forward to that,” said Williams after the win. “Any playoff series it’s important to get off to a great start, especially when it comes down to the nitty-gritty.”

Toronto’s All-Star shooting guard DeMar DeRozan had a very solid game for the Raptors, as he compiled 24 points to go along with six rebounds and four steals on defense. Raptors point guards Kyle Lowry and Greivis Vasquez each scored 12 points, while power forward Patrick Patterson had 11 points, three rebounds and three assists on Saturday night.

For the Heat, Goran Dragic had 22 points and five assists while Hassan Whiteside had a great night with 16 points, 18 rebounds and six blocked shots. However, Whiteside was awful from the free throw line as he made only four of his 16 attempts from the stripe.

Whiteside, who was guarded by Toronto center Jonas Valanciunas on the evening, caused the Raptors’ big man to foul out of the game in only 10 minutes of time on the court.

“Once a team realizes they can’t stop you, they gonna just keep fouling,” said Whiteside after the game.

With the loss, it is all but certain that the Heat will not make the playoffs this season, their first time missing the postseason since the disastrous 2007-2008 season when Miami went 15-67 in the regular season.

Up next, the Heat will play their final home game of the season when they host the Orlando Magic (25-55) on Monday night at American Airlines Arena. The contest, which will be labeled as Fan Appreciation Night, is scheduled to tip off shortly after 7:30 pm ET.
[xyz-ihs snippet=”Responsive-Ad”]