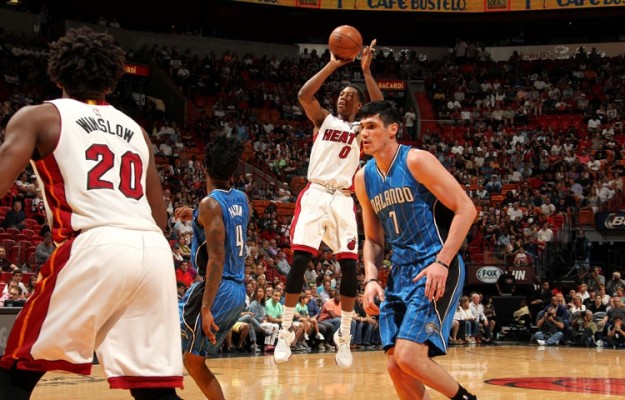 (Miami, FL) – Taking control of the game in the third quarter helped the Miami Heat stay in the thick of potential home-court advantage for the first round of the playoffs as they got revenge on the Orlando Magic with an easy 118-96 victory at American Airlines Arena on Sunday night.

The win came two nights after dropping a 112-109 decision to Orlando, with the duo of Dwyane Wade and Hassan Whiteside combining for 20 points in the third period. Miami would outscore the Magic 33-20 in those 12 minutes to take a 20-point lead entering the final quarter.

That hefty margin was never threatened in the final period and helped the Heat finish the night hitting 55 percent of their shots, while also improving their record to 47-33. Miami caught a break earlier Sunday when Charlotte dropped a 113-98 decision at Washington.

The loss, coupled with the Heat’s win, now puts them one full game ahead of the Hornets for the fifth seed in the Eastern Conference. It also deadlocks Miami with the Boston Celtics with each team having two games to play, including a matchup against each other in the regular season finale on Wednesday,

One down note in the Heat win was that rookie Justise Winslow left the game with an ankle injury, but Miami head coach Erik Spoelstra indicated that it was minor in nature.

“He sprained his left ankle, but will travel with the team,” Spoelstra said. “He already iced it and was up around, walking around.”

Four of the five Heat starters ended in double figures, led by Luol Deng with 20 points and five assists. Goran Dragic added 19 points and six assists, while Whiteside picked up another double-double with 18 points and 15 rebounds. Wade added 17 and Gerald Green came off the bench to tally 15 points on the evening.

“We need a higher level from Hassan and I thought the time was right now,” Spoelstra said after inserting his breakout center into the starting lineup. “He responded in the right way. Now the challenge will be to do it again.”

Whiteside got the start after 36 consecutive starts from Amare Stoudemire, who recorded a DNP against the Magic.

From a team perspective, the ball movement for Miami was strong throughout the contest, ending the night with 28 assists. They also virtually eliminated turnovers during that strong second half, committing just three after being tagged with nine during the first two quarters.

“Everyone is in the rotation except for Briante (Weber) right now,” Spoelstra said. “I’m fully ready to play everyone on any night.”