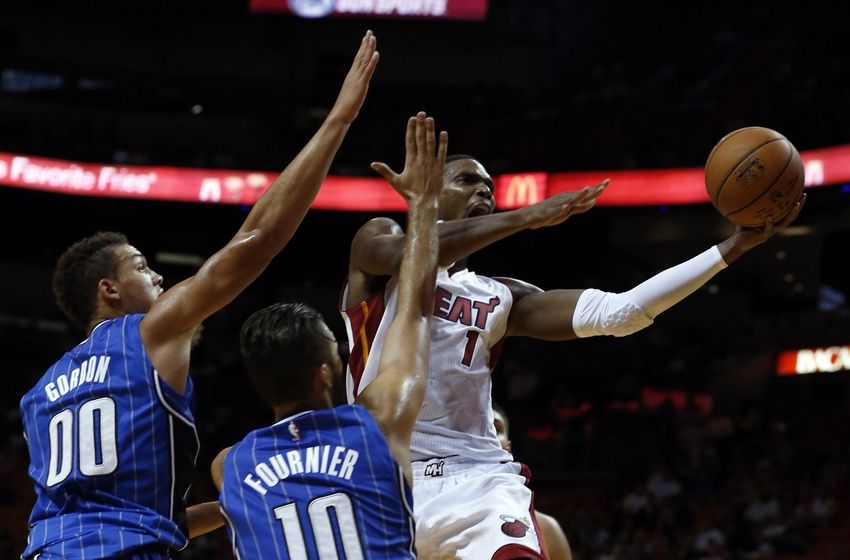 It’s certainly been a rough start for the Heat this year but the team is hopeful for a win on the road against the Magic. Unfortunately, they will be forced to play yet again without team leader Dwyane Wade due to a hamstring injury. Miami has also lost a solid asset in Norris Cole, who dislocated his finger during Thursday’s brutal loss to the Los Angeles Clippers.

Though Miami dropped the ball defensively on Thursday, the team is making no excuses and is determined to identify and conquer their weaknesses to deliver a win against the Magic. In an interview following Friday’s practice, Miami coach Erik Spoelstra had this to say about his team’s performance on the court:

“The first part is [that] our competitive disposition isn’t adequate enough and secondly, there’s the aspect of doing a job and finding consistency. There have been times we are all on the same page and times that we’re not. A team like the Clippers can come in and really expose when we’re not on the same page.”

Although Miami was unable to push past the offensive drive of Los Angeles, a few players stood out on the court and showed great promise for the rest of the season. Chris Bosh was a breath of fresh air; following several disappointing games, the NBA icon led Miami with 28 points scored, proving that he is back, and ready to take over while Wade recovers. Rookie Shabazz Napier dropped a career high, scoring a total of 17 points for the team.

“He’s growing every day,” stated Cole after Friday’s practice. “He’s asking the right questions day after day and just really getting into the zone and improving his game.”

Just Wednesday, Orlando was also rocked by the Clippers, whose benched players outscored the Magic starters 60-54. It was the first time in franchise history that the Clippers were able to beat both Orlando and Miami back-to-back. The Magic also played a close game against the Charlotte Hornets (105-100) on the road Friday night, just narrowly taking the win in the fourth quarter after a 23-point comeback in the third and fourth quarters. Coming off of a heel injury, Evan Fournier led the Magic to victory with 21 points followed by Tobias Harris and Elfrid Payton, who scored 17 and 16 points, respectively.

When the two teams face each other on Saturday, it should make for a thrilling showdown. Though Orlando boasts the 14th best defense in the league (seven spots higher than the struggling Heat), Miami has the offensive edge with the eleventh ranked offense, in contrast to Orlando’s 23rd spot on the list. However, Miami’s accuracy from the field is only one percent higher than the Magic’s at 52% overall. Where Miami is really going to struggle is in the rebounding department; with the lowest ranking in boards, it will be tough to compete with the number ten rebounding team in the league.

With both teams so evenly matched, it’s tough to determine who will come out on top. With a healthy Miami team, it would be easy to predict a Heat win, but without Wade and now Cole, it’s anyone’s game. When asked by the media about the frustration surrounding the Heat’s plague of injuries this season, Cole spoke up with a positive attitude,

“It’s frustrating but its better early than late. Some things you can’t control so we don’t feel sorry for ourselves. We’re professionals. Whoever’s out there is expected to compete at a high level, and is still expected to win so when these guys get banged up, they have to have proper treatment to get back out there and help the team.”

In the same interview, Cole also admitted that, although he cannot be certain it’s happened, it’s likely that the other teams use Miami’s injuries to their advantage on the court.

“Obviously they’re aware. Some guys may use it to their advantage…if you’re out there and I know something is a weakness I’m gonna try to expose it. I wouldn’t expect any different from anyone else.”

With Wade and Cole out, expect to see Mario Chalmers continue his run as a starter, along with Napier, who continues to make improvements on the court as each week passes. With the Heat averaging 97 points per game and the Magic averaging 96.5, there’s no way to predict this game, though Miami has won two out of three games on the road, and has beaten the Magic the last nine times they’ve met on the court. However, during Friday’s practice, Bosh expressed his determination to turn Thursday’s loss into a learning experience for the team and remains hopeful that they will be able to correct their errors in order to deliver Miami the win.

“Seeing our mistakes that we made…some are the same, some are new, but overall you’re going to have a lot in a lopsided game. But the encouraging thing about it is that a lot of things can be corrected; sometimes you have to see your mistakes to know that you can do a lot better. You’re always closer to being good or bad and hopefully we will tip the scale to being better.“