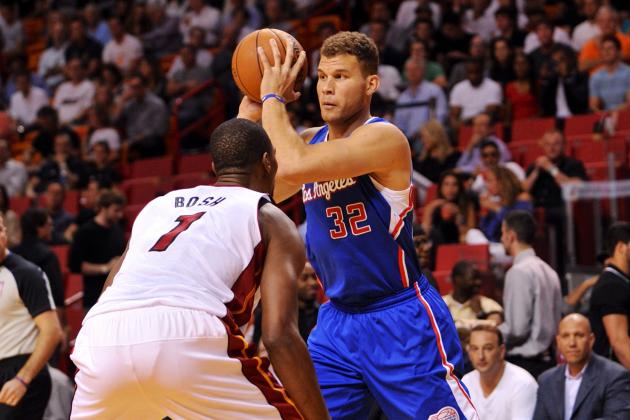 (Miami, FL) — After a hopeful change in pace following their victory against the Brooklyn Nets, the Miami Heat (6-6) lost yet again, this time to the domineering Los Angeles Clippers (7-4,) who scooped up their second back-to-back victory of the season. It’s the first time the Heat have given up three consecutive home games since March 2011.

While putting forth their best effort, the Heat continued to struggle without franchise superstar, Dwayne Wade, who sat his fourth consecutive game due to a strained left hamstring. The team was 5-3 with Wade on the court, and without him they’ve been 1-3, proving his immense value to the Heat. Playing the seventh ranked offense in the league was going to be a challenge regardless of circumstance and even the return of Luol Deng from injury couldn’t save Miami.

The Clippers came to play, and they wasted no time letting the Heat know that they were here to dominate, leading 39-15 after the first quarter, the largest first quarter home deficit of all-time for Miami. The Heat couldn’t hit 39 points until the end of the second.

“We didn’t have a chance tonight after that first quarter,” Chris Bosh reflected, “Good team like that, down 20, you can’t do that. We can’t do that. We’re not good enough to keep making mistakes. … It was a clinic they put on us.”

The Clippers exploded onto the court, slamming home seven dunks and draining 3-pointers in only 24 minutes. After the Heat resisted their offense the first time they took possession, the Clippers managed to score the next 11 times they got the ball, leaving Miami in their dust with a score of 34-11.

Things only went downhill for the Heat; they lost Norris Cole for the second half due to a dislocated finger and although the Heat managed to decrease their point deficit to only 14 points by the third quarter (58-40), it just wasn’t enough to contain the Clippers’ talent. With remarkable pacing, the Clippers danced around Miami, taking advantage of every defensive weakness they could find and shooting 75% from the field early on. Blake Griffin and Chris Paul picked up 26 points each for the Clippers, and Paul contributed 12 assists as well as notching his seventh double-double this season. DeAndre Jordan also came out, scoring 12 points on six dunks and flaunted his eleven rebounds to the Heat, who are currently ranked the worst rebounding team in the league. Clippers coach Doc Rivers expressed his pride in Jordan’s performance stating,

“I think that’s rare. That might not be for him…He’s the perfect guy to have on a winning basketball team.”

J.J. Redick added 14 points of his own to the Clippers’ final score. The team shot a season high of 56% from the field even after clearing the bench in the fourth quarter; a brutal competitor for the half-mast Heat.

On the bright side, the Heat welcomed Deng back to the court, who scored 13 points on 50% from the floor, along with Mario Chalmers who continues to show potential as a high-scoring offensive player week after week. The hero for Miami, however, was none other than fan favorite, Chris Bosh, who scored the highest overall with a cool 28 points, a number he’s previously hit 22 times as a Miami player; the Heat has won 18 out of 22 games when Bosh is hitting that threshold.

After a series of subpar games for Bosh, it was a relief to see him back in his groove, making shot after shot once more. Shabazz Napier managed to hit a season high, scoring 17 points for the Heat and proving his value to the team, even as a rookie.

Still, even after a professional career high for Napier, and a comeback from Bosh, the team just couldn’t seem to rise to the standard that the Clippers held them to. Heat Head Coach Erik Spoelstra commented on the Heat’s performance:

“Not a whole lot to say…That was a blitz in that first quarter. They absolutely knocked us on our heels and we just could never gain our footing after that.”

The Heat only managed 11 assists the entire game, while the Clippers managed 31, 12 of which came from Paul alone. The LA team alternated slam dunks, alley-oops, and three pointers all night, leaving a dilapidated Miami team hopeless to catch up to their speed and agility. Up next, the Heat head to the Amway Center to face the Orlando Magic, who may give them another shot at a victory while the team anxiously awaits the return of their star, Dwayne Wade.
[xyz-ihs snippet=”Responsive-Ad”]