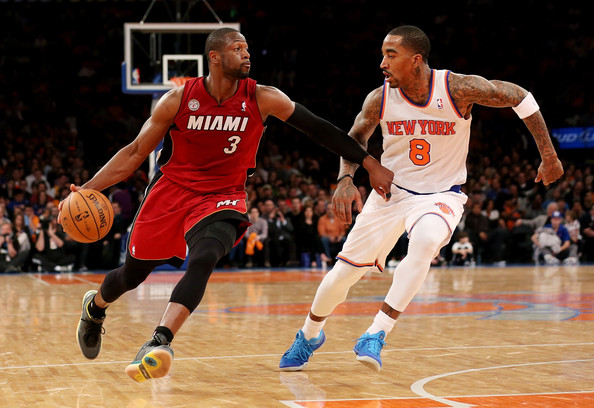 (New York, NY) — The Miami Heat (8-7) visit the New York Knicks (4-13) on Sunday night at Madison Square Garden in a matchup of Eastern Conference teams that look to get back on a winning track.

The Heat are coming off a 114-97 loss to the Golden State Warriors on Tuesday night. It was their fourth loss in their last five home games. Things reached a low point as Miami mustered just 11 points in the fourth quarter and shot 3-for-17 from the field as a team.

Chris Bosh is having a hard time understanding why the Heat struggle when they need points:

“I don’t really get what we think or what we do down the stretch against good teams, the elite teams. For some reason we just forget everything—offense and defense execution.”

Luckily for the Heat, they’ll likely have their star guard back—Dwyane Wade is set to return after missing the last seven games due to a left hamstring injury. Miami went 3-4 in his absence. The 12-year veteran is averaging 19.8 points and a team-high 6.8 assists this season.

The Knicks on the other hand, are struggling in general. The team’s 105-78 loss to the Oklahoma City Thunder on Friday night was the team’s third straight loss. The defeat capped a three-game road trip which saw the Knicks go winless in matchups against the Houston Rockets, Dallas Mavericks and Thunder.

New York gave up 32 points to Thunder guard Russell Westbrook in just 24 minutes of action. It was Westbrook’s third appearance of the regular season after missing a majority of the first month due to a broken right hand injury. The game was a blowout from the very beginning, as the Knicks trailed 40-13 to the Thunder at one point. By halftime, the Knicks trailed 59-33.

“Some of the shots we got, we just missed. I thought the energy was low to begin with. We were a little flat.”

Fisher also stressed that there would be growing pains with this unit:

“This is a step in a long process, and you have to be willing to take the good with the bad. You have to remind guys no matter what your record is as a team, you just have to make sure you’re playing each game and each possession for what it is.”

While the Knicks’ defeat to the Thunder was a blowout, the team was missing star player Carmelo Anthony. Anthony is averaging 23.2 points per game on 48 percent from the field. The second-leading scorer on the team is Amare Stoudemire, who is averaging just 12.1 per game.

Unfortunately for New York, it looks as if ‘Melo will miss his third straight game due to back spasms.

Simply put, the Knicks struggle with or without Anthony. On the season, the team ranks 26th in points, 27th in rebounds, 16th in assists and 18th in points allowed per game. There isn’t a single area on offense and defense where you can say the Knicks excel at.

The Heat will look to take advantage of a team without much scoring punch or rebounding prowess. However, they will have to do so without Chris “Birdman” Andersen. “Birdman” will miss the next two-to-three weeks to a sprained ankle suffered in a victory over the Charlotte Hornets last Sunday night.

While Andersen will miss Sunday’s game versus the Knicks, Norris Cole won’t—Erik Spoelstra stated on Saturday that Cole will make his return from a dislocated finger on his left hand that caused him to miss two games, via Ira Winderman of The Sun Sentinel:

“Norris went through the non-contact part of practice. He’ll be fine Sunday. We just didn’t want to risk him getting hit.”

Sunday’s game in New York marks the beginning of a stretch that will see the Heat play seven of their next eight games on the road. Miami is 4-2 on the road so far this season.

Spoelstra remains focused on Sunday’s game only, via Winderman:

“We’re just trying to focus on Sunday, the New York game. We’ll spend the majority of the month on the road in December. We want to build that in-the-same-foxhole mentality of being on the road. You really need to connect it and that’s the habit we want to build.”