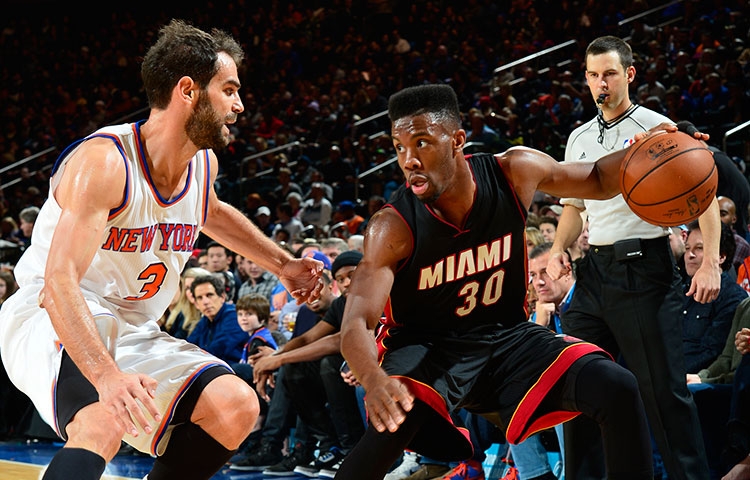 (Miami, FL) — After suffering yet another embarrassing defeat at the hands of the San Antonio Spurs, the Miami Heat (21-29), currently on a three-game losing streak, look to redeem themselves against the New York Knicks (10-41) at American Airlines Arena on Monday night.

It will be the second meeting between the two teams after Miami won the first contest, 86-79, at Madison Square Garden behind a combined 47 points between Dwyane Wade and Chris Bosh.

Speaking of Wade, this will be his sixth straight game missed with a right hamstring strain despite taking part in a non-contact practice on Sunday.

“It’s good to have him back out there with the guys,” said head coach Erik Spoelstra.

In the wake of Wade’s extended absence, Miami agreed to sign Tyler Johnson for the rest of the season on Sunday morning. He will be available against the Knicks with averages of 7.5 points, 2.5 rebounds, 1.3 steals and 1.2 assists in 18.9 minutes played over six games and fresh off an 18-point performance against the Spurs.

Hassan Whiteside, the team’s leading shot-blocker and rebounder, is questionable to suit up against the Knickerbockers after missing Saturday’s game against the Spurs with a right ankle sprain.

Much like the Heat, the Knicks are also looking to get back on the winning column after suffering a frustrating 106-92 loss against the streaking Golden State Warriors on Saturday night. New York ranks 28th in the league with 92.7 points per game, but are surprisingly more effective on the road, with an average of 93.5 points per game on 44% shooting.

Carmelo Anthony missed the game against Golden State but is listed as probable to suit up for Monday night’s meeting with Miami.

Miami will look to keep their four-game winning streak against the Knicks going on Monday night as tip-off is set for 7:30 pm ET and the game will be broadcast on Sun Sports.
[xyz-ihs snippet=”Responsive-Ad”]