Miami Heat vs. New Orleans Pelicans Game Recap: The Return of the Dragon 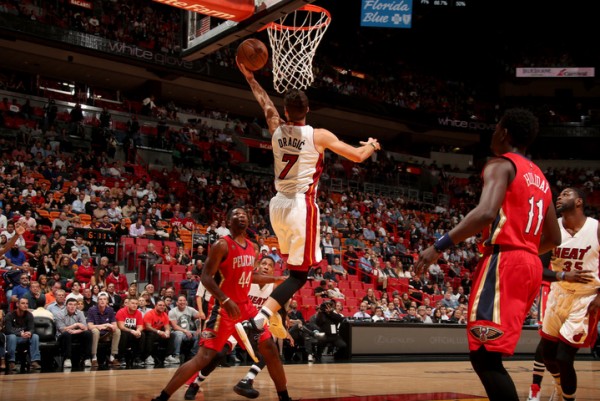 (Miami, FL) – In what continues to be an amazing turnaround to their thrill ride of a season, the Miami Heat (33-35) pulled away late and secured a 120-112 victory over the New Orleans Pelicans (27-41) on Wednesday night at American Airlines Arena.

With the victory, their eye-opening 22nd win in their last 27 games, the Heat surpassed the Milwaukee Bucks (32-34) for the eighth playoff spot in the Eastern Conference standings. After starting the 2016-17 season with an 11-30 record, the Heat continue to add onto potentially the greatest turnaround to a season in NBA history.

The Bucks, who play on the road tonight against the Los Angeles Clippers, would gain the eighth seed right back from the Heat if they were to pull off the upset victory at Staples Center.

After missing Miami’s 102-98 road loss to the Indiana Pacers on Sunday with a severely swollen right eye, Heat point guard Goran Dragic returned to action with a vengeance on Wednesday night and lit up the Pelicans with a game-high 33 points (11-of-18 from the floor, 5-of-9 from three-point range and 6-of-8 from the foul line) to go along with five rebounds and two assists.

“It was tough. I wanted to come back so bad to be with those guys on the floor, battle for each other and to get wins. Great win tonight. We need to take care of business at home, and this is a good start for us,” Dragic said after the game.

Dragic, who had a whopping 16 points in the third quarter alone, brought the Heat crowd to their feet when he pulled off a nifty spin move and hit a running jumper, which gave the Heat an 82-76 lead with 1:40 left in the frame.

“Just incredible energy. He was tenacious offensively, really putting pressure on their defense, attacking off the dribble and was in a really great rhytym shooting the basketball as well,” Heat head coach Erik Spoelstra said of Dragic’s performance. “I think he just felt fresh and anxious to get back out there. He felt really bad that he missed on Sunday but, come on, he couldn’t see. So it was great to have him back and having him contribute to a team he cares so much about.”

The Heat put the game on ice late in the fourth quarter with a quick three-point barrage, as Josh Richardson hit one and then James Johnson hit two in a row for a quick 9-0 run and a comfortable 111-102 lead.

“We made some big ones going down the stretch. That continues to be our identity, which we didn’t have the entire game, but ultimately you’ve got to find different ways to win and our guys were able to do it,” Spoelstra said.

Star center Hassan Whiteside had yet another double-double with 20 points, 17 rebounds and two blocked shots, while shooting guard Wayne Ellington hit 5-of-8 three pointers en route to 19 points off the bench.

As a team, the Heat hit 16-of-35 shots from behind the arc and were an efficient 16-of-19 from the charity stripe.

For the Pelicans, they were led by their four-time All-Star power forward Anthony Davis and his 27 points (7-of-17 from the field and 13-of-18 from the free-throw line), eight rebounds, three blocks and three steals. In addition, newly acquired star center DeMarcus Cousins had 19 points and led New Orleans with nine boards, while shooting guard E’Twaun Moore came off the bench to score 18 points on 8-of-12 shots from the floor.

Up next, the Heat will play their second game of a five-game homestand on Friday night at American Airlines Arena when they host the Minnesota Timberwolves (28-39). The contest, which is scheduled to tip off shortly after 8:00 p.m. ET, will be broadcast live locally on Fox Sports Sun and nationally on NBA TV.
[xyz-ihs snippet=”Responsive-ImagenText”]