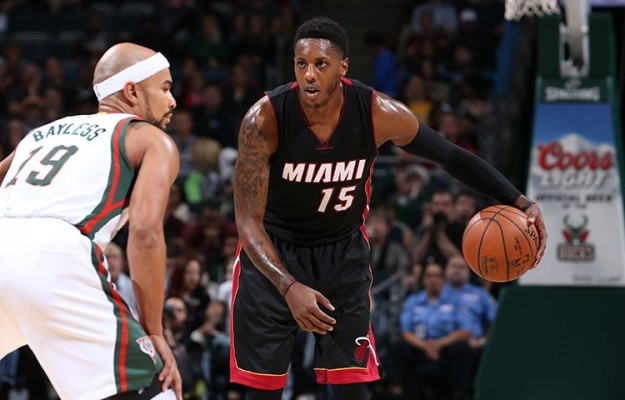 Despite leading by as many as 11 points early on in the second quarter, bad defense and terrible rebounding led to the team’s third straight loss. The defeat dropped the Heat to a game below .500 for the first time this season. The 24-point loss is the team’s worst of the season.

The Bucks’ bench scored 60 points, while Miami’s bench contributed just 18 points to the cause. The rebounding effort was just as bad, as the Heat grabbed just 20 rebounds in comparison to Milwaukee’s 45 boards. The 20 team rebounds are the lowest total in a single game in franchise history.

No. 2 overall pick Jabari Parker had 14 points, 10 of which came in the opening quarter. The Bucks were led by Kendall Marshall’s 20 points on 7-of-8 shooting, including four treys. Milwaukee had six players who scored in double figures overall.

Miami led 36-25 at the 10:30 mark of the second quarter, but a 9-0 run by the Bucks cut the Heat’s lead to just two points. The shift in momentum from that point led to Milwaukee dominating the remainder of the game.

After scoring 30 points on 55 percent shooting and nine assists in the opening quarter, the Heat fizzled in the remaining three quarters, posting just 55 points on 39 percent efficiency with 12 dimes. The fourth quarter was the team’s worst, as Miami shot just 27 percent.

At the 9:30 mark of the fourth quarter, the Bucks’ Kendall Marshall hit a 3-pointer that pushed his team’s lead to 86-72. It capped a 19-3 for the Bucks that began late in the third quarter.

The Heat’s defensive issues continued to persist in the team’s worst loss of the season. Miami allowed an onslaught of offensive rebounds, second-chance points and 3-pointers en route to a convincing defeat. The team is allowing a franchise-worst 47.1 percent shooting from the field through the first 19 games of the season.

Wade commented on Miami’s issues on defense following the game with a blunt statement:

Danny Granger started at small forward in place of the injured Luol Deng (hand), while Mario Chalmers continued to start in the absence of Norris Cole (cold) at point guard. Granger scored seven points on 2-of-4 shooting while Chalmers was inefficient in scoring nine points on 2-of-9 from the field.

Udonis Haslem was a healthy scratch for the Heat. After the game, Sun Sports’ Jason Jackson asked coach Erik Spoelstra if Haslem could have helped cure the team’s rebounding woes after tonight’s lackadaisical rebounding effort:

“Looking back, UD could have helped with the rebounding. I’ll look at everything in the next couple of days.”

While the defensive issues were magnified, the offensive unit struggled on its way to 44 percent shooting. During the first four-and-a-half minutes of the fourth quarter, the Heat failed to knock down a single field goal. Chalmers’ 3-pointer with 7:26 left was the Heat’s first points of the period.

Wade attributed the team’s loss to both defensive and offensive woes:

“Offensively we couldn’t score the basketball. People continue to point out the defense, but you’ve got to put the ball in the basket to win games. We went a long time without scoring.”

Josh McRoberts started his second game of the season at power forward. The veteran looked passive and didn’t score his first basket until midway through the third quarter. He finished the night with just two points and one rebound in 22 minutes of action.

The Heat will play four more road games as part of their five-game road trip. Their next stop will be in Memphis to play the Grizzlies on Sunday night at the FedEx Forum. Tipoff is set for 6:00 pm EST and the game will be broadcast on Sun Sports.
[xyz-ihs snippet=”Responsive-ImagenText”]