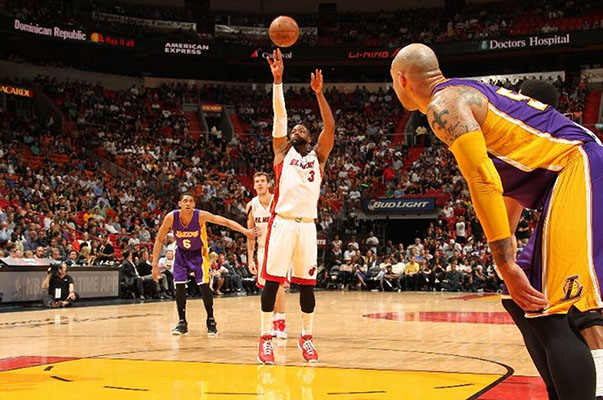 Despite the Lakers leading the Heat 88-87 with 3:31 remaining in the fourth quarter, Miami was able to outscore Los Angeles by a score of 13-7 over the remaining three-and-a-half minutes of the game for their second straight home victory.

The Heat were once again led by a dominant performance by Hassan Whiteside. The 7-foot center scored 18 points and grabbed a career-high 25 rebounds in the victory. It was his third performance this season with at least 24 rebounds, which is the second-best mark in franchise history. He had four blocks alone in the third quarter.

Lakers coach Byron Scott cited Whiteside as the reason for the Heat’s victory:

“You have one guy who outrebounded all our bigs. I think that says enough.”

Dwyane Wade scored 25 points on 11-of-12 shooting from the free throw line while Goran Dragic notched 21 points and six assists on 8-of-8 from the charity stripe.

The game was a back-and-forth contest for much of the night. Early on in the game it was the Lakers who raced out to an 11-4 lead within the first four minutes of the game. By halftime, Los Angeles led by a score of 51-46.

However, it would be the third quarter that would prove to be pivotal for both teams.

The Heat were able to consistently make it to the free throw line, as they entered the bonus early with 9:58 remaining in the third quarter. Miami went to the line 16 times, converting on 13 of those attempts. For comparison’s sake, the Lakers were 5-of-7 from the line in the third.

Despite the Heat’s dominance from the charity stripe, the Lakers kept it close—they trailed just 76-73 by the end of the third.

With Miami and Los Angeles exchanging leads during the final period, Dragic put the Heat up for good, 90-88, with a three-pointer from the top of the key at the 3:30 mark in the fourth.

The Lakers would have one final chance to tie the game down 97-94 with 17 seconds remaining, but rookie Jordan Clarkson missed a 24-foot three-point jump shot. Miami would knock down three of their final four free throw attempts to seal the game.

Coach Erik Spoelstra spoke of his team’s grit in the postgame press conference:

“We showed some grit in the fourth quarter. The majority of games are going to come down like this. The ultra competitive, fierce competition going down the stretch. Managing a lot of different emotions, managing competition, but it was good to see us show that grit.”

Jeremy Lin led the Los Angeles offensive attack with 12 points and nine assists. He had help as six other Lakers scored in double figures, including Ed Davis and Wayne Ellington, who each scored 14 apiece.

Despite the Lakers shooting more efficiently from the field than the Heat (43.2 percent in comparison to the Heat’s 40.5 percent), Miami converted on 33 of their 43 free throw attempts. The Lakers went to the line just 17 times, knocking down 11 of them.

The victory marked just the sixth time all season long that the Heat have won back-to-back games. Miami defeated the Phoenix Suns, 115-98, on Monday night.

Just two nights after Whiteside was ejected due to a physical altercation with the Suns’ Alex Len, the young center was almost involved in another one when he was fouled hard on his way to the basket by Davis. Unlike last time, Whiteside maintained his composure before shooting his free throw attempts.

The 7-footer commented on the play following the game:

“It’s just a part of basketball. It’s guys just really beating me up. You just get beat up every game. I’m just gonna try to come out here and give it my all and just try to win every night.”

Miami will take a trip to D.C. to play the Washington Wizards on Friday night. Tipoff is set for 7:00 pm EST and the game will be broadcast on Sun Sports.
[xyz-ihs snippet=”Responsive-ImagenText”]