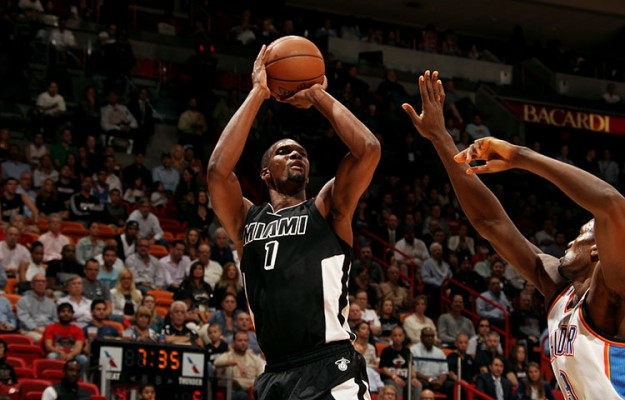 Russell Westbrook scored 19 points and had ten rebounds. Kevin Durant also scored 19 points while adding eight rebounds and eight assists, and the Heat became the first team that failed to keep the Thunder under .500 this season. Durant was quick to dismiss the stat, and considered it “nothing.”

“We have to keep pushing,” Durant said. “We’re not worried about it. We didn’t come in here and rejoice because we’re over .500.”

Miami’s top scorer was Dwyane Wade, who was just behind the Thunder’s top performers with 18 points. Chris Bosh added 16 points and seven boards for Miami while Hassan Whiteside shone with ten points in eleven minutes on 5-for-5 shooting before being removed from the game with an ankle injury in the second quarter.

“He has a sprained ankle,” said Heat coach Erik Spoelstra after the game. “He won’t be traveling with us, but it’s not a third degree, so if there was a bright side, that would be it.”

Although the Heat came out strong in the first quarter, the team began to feel the absence of Whiteside in the second. Miami quickly succumbed to the pressure of Westbrook and Durant, and gave up easy dunks to the Thunder. The Heat were kept to 42 percent shooting from the paint for the remainder of the game.

“We weren’t loose with the ball, but we weren’t taking care of the ball,” Bosh said.

Following Whiteside’s removal from the game, the Heat struggled to find their footing offensively, and didn’t score for four and a half minutes. They still managed to lead at the half, 50-49.

The third quarter had the Heat hustling to move the ball and gain a steady lead, but instead they deflated, much like they have all season, and let OKC take an 11-0 run. They sprang to life in the fourth and tried to make up for lost ground with Chris Andersen scoring on two back-to-back alley oops.

“Well, the box score pretty much sums it up, if you just look at the column of empty possessions. That really kills you against a team like this and most of those possessions led either to scores, or worse, pick sixes,” said Spoelstra following the game. “To leave a real competitive, defensive game like that on the table is disappointing for all of us. We just need to find consistency in our game. There’s times that we look great and we’re organized getting the ball where it needs to be, and then there are nights like tonight.”

Next up, the Heat head to Time Warner Cable Arena in North Carolina, to take on the Charlotte Hornets on Wednesday, January 21. Tip-off is at 7:00 PM E/T and is set to broadcast on Sun Sports.
[xyz-ihs snippet=”Responsive-ImagenText”]