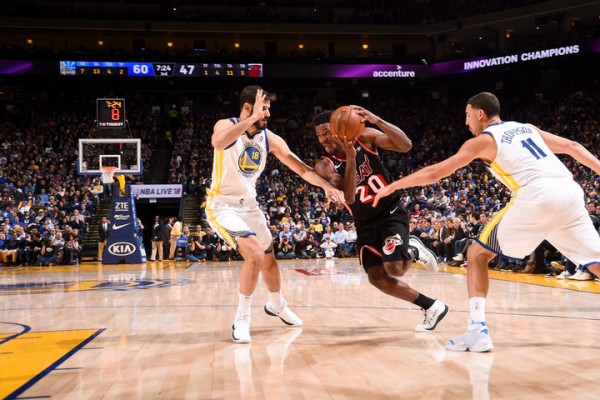 (Oakland, CA) – The Miami Heat hoped to ride the wave of Sunday’s thrilling victory over the Los Angeles Clippers when they traveled to challenge the Golden State Warriors on Monday, but the game did not go as planned. While they started the game off strong, it eventually became clear that the young guns of Miami have a lot of growing to do before they can compete with the NBA’s best.

The Heat played solid defense throughout the game, holding the Warriors’ potent offense to only 90 points and former MVP Stephen Curry to just 5-of-19 from the field on the night, but their offense was never able to put it together on their way to a blowout loss, 97-80.

“This game was kind of in our wheelhouse if we play with more intensity, you know a low-scoring game,” Dragic said following the game. “You have a chance on the road when you’re playing this kind of defense, but our offense put us in trouble sometimes. It is what it is. It was back to back for us. We were a little bit tired, but no excuses, they were better tonight.”

Throughout the first half, the Heat battled toe to toe with the defending champs. With strong performances from James Johnson, who had 21 points, nine rebounds, six assists, and three steals, and Goran Dragic, who had 19 points, four assists, and three rebounds in the game, it looked like the Heat were going to go into the locker room in very good position, even leading with 5:35 left in the first half, 32-29.

However, a late second-quarter Warriors run fueled by strong shooting from Draymond Green, who scored a season-high 18 points, and Kevin Durant, who scored a game-high 21 points with eight rebounds and six assists, left the Heat with a 13-point deficit to begin the second half.

“I think probably more than anything, it’s hard enough to guard them through all actions, the playmaking, making extra passes, getting them off the three-point line, but when you give up so many in transition,” head coach Erik Spoelstra said of the several runs the Warriors were able to go on. “None of this is easy obviously when you’re defending all the way out to 25 feet, but those are back-breaking plays.”

In the third quarter, the Heat fought to battle back, bringing the deficit to 10 points with 7:00 remaining in the period, but the Warriors’ shooters quickly began to heat up and stretched the lead to 18 points by the end of the quarter.

In the final frame it was more of the same. While the Heat attempted to get back into the game, their offense was unable to keep up as the Warriors’ firepower proved to be too much to contend with as Green, Durant, Curry, and Klay Thompson all reached double digits on the night.

The Heat were shorthanded on the night as Dion Waiters missed his second game in a row following the birth of his newborn daughter. While the bench served as one of the primary reasons for Sunday’s victory, Wayne Ellington, who had nine points, and Tyler Johnson, who had just three points and four rebounds, failed to get it going during the game.

Starter Hassan Whitside, who proved instrumental in the Heat’s victory over the Clippers, also struggled throughout the game and finished with just three points and six rebounds. In fact, Spoelstra ended up benching the 7-footer in the third quarter. Following the contest, Whiteside fielded questions about his benching.

“I made a mistake, Zaza [Pachulia] got behind me. I was really in here at halftime contemplating like, ‘Let’s get them this half. I’m gonna really come out dominate this second half.’ Coach sat me down for the rest of the game,” Whiteside said. “He made it, I guess he thought it was better if I didn’t come back in, I don’t know. I really don’t know.”

The Heat were flying high following Sunday’s game, finally proving that they could close out games in the waning moments. Monday’s game had a very different feel altogether, however, as the game seemed out of reach for most of the second half. The Heat will now have two days to regroup before traveling to Phoenix to face off against the Suns in the fourth game of their six-game road trip.
[xyz-ihs snippet=”HN-300×250-TextnImage”]