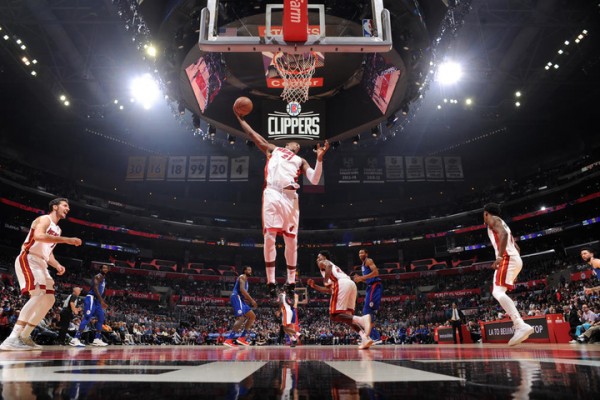 (Los Angeles, CA) — The 2017-18 Miami Heat are no strangers to late-game thrillers. While many of their recent wire-to-wire games have ended in defeat, the Heat were able to secure a win on Sunday, 104-101, over the Los Angeles Clippers.

The Heat led comfortably throughout the first half of the game, taking a 62-49 lead at the end of the first half. After the Heat had outscored the Clippers 27-17 in the third quarter, they seemed well on their way to an easy victory, but as the final quarter of play began, it became immediately clear that the Clippers were going to go down swinging.

“It had a little bit of crazy in it,” head coach Erik Spoelstra said after the game. “But right now, for us, we have to find ways, different ways on the road, even if it is crazy, even if it is ugly. I think it’s really important for our team to go through the games that we went through the last two games. Even in the Minnesota game, where there’s incredible emotion and then what is required of that is incredible competitive emotional stability.”

The fourth began with a stunning 16-0 run by the Clippers as the Heat struggled to reclaim their first-half offensive rhythm. With just under three minutes to go in the fourth quarter, the Clippers took a 95-93 lead on a pair of Blake Griffin free throws.

The rest of the quarter was a fever pitch of action. Josh Richardson hit a corner three-point shot with 2:39 remaining to reclaim the lead, 96-95. Both teams then traded trips to the free-throw line, but after a Wesley Johnson dunk, the Clippers went up 101-100. The Heat committed one of their 16 team turnovers with 17 seconds left in the game, but when Austin Rivers had an opportunity to put the game out of reach, he missed two attempts at the free-throw line.

Then, with eight seconds remaining, James Johnson — who had 14 points, five assists, and two rebounds on the game — went to the free-throw line and hit both attempts to put the Heat up 102-101. Moments later, Griffin missed a 17-foot jumper with the Clippers down one. Richardson was then sent to the line and hit both free throws securing the Heat victory, 104-101.

Following the game, Johnson reflected on the primary difference between the victory against the Clippers and the defeat at the hands of the Denver Nuggets on Friday.

“Our mental stability. We didn’t get down on ourselves, we didn’t get down on each other. We kept it positive regardless of what went on, what happened,” he said. “The kind of characters our guys showed by coming back, and just being okay with the situation. We ended up getting it done.”

Center Hassan Whiteside dominated much of the game and led the Heat with 21 points, 17 rebounds, and two blocks. In fact, much of the Clippers comeback took place with Whiteside sitting on the bench. Following the game, the Heat big man reflected on watching the surge from the sideline.

The Heat got a huge boost from their bench throughout the game. Tyler Johnson contributed 19 points, two rebounds, three assists, and three steals, while Wayne Ellington took advantage of his increased minutes with Dion Waiters missing the game due to the birth of his daughter. The shooting guard added 17 points, one rebound and one assist in the contest.

“What’s funny is, we preached that we were going to be in this position this whole road trip,” Tyler Johnson said immediately following the game. “We’ve been giving up leads, that’s been one of our things. So when we started, when it started to go the other way, man I’m just proud of our guys for not panicking, staying with it, and being able to pull it out.”

With a 4-5 record, the Heat will now continue their six-game road trip by traveling to Oakland to face off against the defending NBA champion Golden State Warriors.
[xyz-ihs snippet=”HN-300×250-TextnImage”]